Modi and the Indian Manifesto 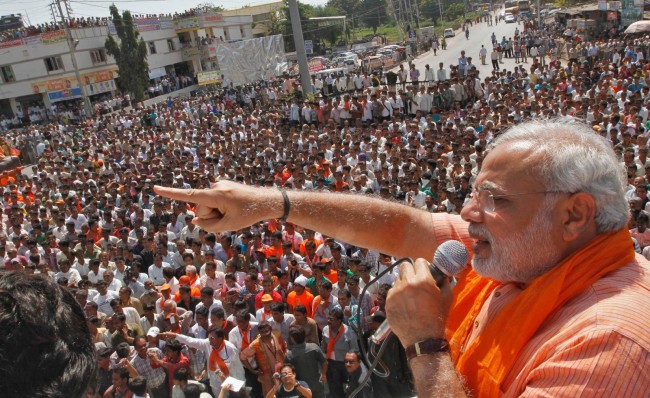 India, the world’s largest democracy, commences voting in the largest general election the world has ever seen, as Prime Ministerial candidate, Narendra Modi, puts forth the party’s manifesto.  Modi, representing the Bharatiya Janata Party’s (BJP), released a manifesto to the people of India on Monday. The manifesto made three assurances:  To work hard to the end, to never act in bad faith and to never act out of self- interest.

Present in the manifesto are arguments regarding the disparities between the eastern and western regions of India and plans to bring the east on par with the west. Also outlined in the manifesto are plans to make India into a “global hub for arbitration and legal process outsourcing.” Modi has previously discussed his ideas for India which he calls the 5-Ts of “Brand India,” being talent, trade, tradition, tourism and technology, with emphasis on youth development initiatives.

Along with the manifesto, Modi made three personal promises, “I will never be found wanting on hard work, I will not do anything for myself and I will not do anything with bad intent.”  Modi is contesting the election with Rahul Ghandhi of the ruling Congress Party and Arvind Kejriwal of the newly formed Aam Aadmi Party (AAP), which translates to the party of the common man. However, if there is ever a story to be told about a common man, it is the story of Narendra Modi.

The story of Narendra  Damodardas Modi reads as though it could be an Indian film manifesto penned and directed by fellow Gujarati film director Mahesh Bhatt.  Born to a lower cast family in the North Western Indian State of Gujarat, Modi grew up selling tea to train passengers amidst the hustle and bustle of passengers and luggage carrying coolies. He attended government school and later became a part of the volunteer RSS force.  Modi later joined the BJP, after the RSS, making a mark for himself as he increased in rank. Modi, known to be rebellious and opinionated but also an effective organizer, was elected as the Chief Minister(CM) of Gujarat in 2001, winning three consecutive elections before he was chosen by the BJP as the prime ministerial candidate last year. He is accredited with providing strong industrial growth for his home state.

Modi’s prime ministerial campaign stresses the vast economic and social improvements he claims as Chief Minister of Gujarat. Under Modi’s leadership, economists list Gujarat as having the fastest growth of all 14 Indian states in relation to gross state product. Gujarat’s employment rate has been fairly low since the 90’s and has remained so during Modi CM tenure, but lags behind other Indian states such as Karnataka. Modi is highly focused on foreign direct Investments for his State, and has had mixed, but mainly positive results.

Modi is a controversial figure in India. He emphasizes that his time as Gujarat’s CM has been a success and he has made his state the “global gateway to India,” but his critics and opponents view him as an extremist.  In a country where the Hindu-Muslim relationship can be extremely tense at times, Modi was alleged to have allowed and encouraged mob attacks on Muslims in Gujarati towns. He denies any involvement and has been cleared of the accusations.  Moderate Hindus believe that the far-right Gujarati nationalist and the BJP are Hindu supremacist who oppose the core values of the Hindu faith.

65 percent of India’s 1.2 billion population are younger than 35, and 8.1 million of them will have a ballot in which 20 percent will be voting for the first time. Therefore, it would be futile to overlook the youth of India in any manifesto, Modi’s or otherwise.  India is a changing society where tradition and modernity are swaying side by side fighting for coexistence. A modernity that is being ushered in by the young of the subcontinent who are more exposed, more liberal in thought and economically self-sufficient than ever before. Keeping that in mind, any manifesto would be futile not to involve and adjust to the youth of India, and in theory Modi’s “Brand India” does, for now.