UPDATE — A Mozilla spokesperson contacted the Guardian Liberty Voice today to make a clarification on some of the statements in this article.

“The three board members ended their terms before Brendan was publicly announced as CEO for a variety of reasons. Two had been planning to leave for some time, one since January and one explicitly at the end of the CEO search, regardless of the person selected.”

The original article did not make clear the fact that some of these members had reasons for leaving other than the CEO choice of Brendan Eich.

ORIGINAL ARTICLE — If anyone thought that Silicon Valley and the rest of the tech industry does not have a conscience, a story has arisen that will change that idea. One of the most popular web browsers, Mozilla Firefox, appointed its new CEO just about a week ago and he has just as quickly resigned over his opposition to gay marriage. Mozilla CEO Brendan Eich made a $1000 contribution to support a ban on gay marriage in California back in 2008 and that decision has come back to haunt him as employees and the public voiced their disapproval.

Brendan Eich is a programmer known for creating the important programming language Javascript, so he was a natural pick to be the popular browser’s new chief executive officer. But in Silicon Valley, a mostly liberal place with strong ties to supporting LGBT equality, his opposition to gay marriage was a glaring problem. Employees started to voice their disapproval, swiftly followed by Twitter.

Nevertheless, Eich promised that he would be fair and open with employees and that he would keep his personal beliefs separate from his business practice. He promised to be fair to everyone, regardless of age, sex, orientation, gender identity, religious belief, ethnicity, or race. Despite the long list of inclusive rhetorical buzzwords, no one was really convinced. 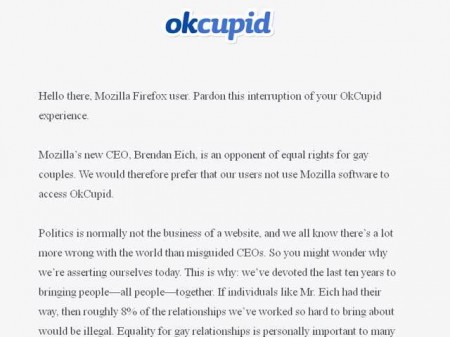 Three members of the board of directors resigned over the choice to appoint Eich as CEO and the resulting uproar was enough to force his resignation. Besides employees of Mozilla Firefox and Twitter users, OKCupid also expressed their opposition to Eich by asking users of their site who logged in using Firefox to please use another browser. That was big news that could not be ignored. Eich’s personal views on gay marriage made him unfit to be CEO because it would cost the corporation money if users started deserting the browser en masse.

The new Mozilla Firefox CEO subsequently resigned after his views on gay marriage became a problem for the company. He, nevertheless, believes that his opinion on gay marriage was not relevant to running a tech company. People are beginning to wonder whether he is right and whether it is okay to let gay marriage opinions affect a person’s business career.

Opinions are no doubt split on that topic. Some people will argue that holding negative views on LGBT equality will affect how they approach LGBT employees and other issues surround workplace equality. A CEO opposed to gay marriage could possibly affect what benefits his company gives to LGBT employees and their significant others. That is certainly a worry when it comes to people like Brendan Eich who hold top level management positions.

There are others, however, who worry that supporters of LGBT equality are becoming just as exclusionist as opponents used to be. One writer pointed out that less than ten years ago, opposition like Eich’s was the norm in California and it is only recently that support for LGBT equality has become the rule. The worry is that now that LGBT supporters are the majority, they will become as intolerant of dissent as the new minority used to be.

That debate, however, is largely irrelevant when all the facts are taken in to account. Brendan Eich was asked to resign not necessarily because he opposed gay marriage, but because his appointment created unrest in the company and not just among employees. Having three members of the board resign over an appointment is not a good thing. Moreover, Eich’s handling of the situation with his employees showed a serious lack of leadership. His statement regarding fairness and openness was a show of those virtues, but he failed to make his employees actually feel heard or protected. His assurances of treating everyone equitably regardless of their status obviously did not make anyone feel assured.

The executive chairwoman for Mozilla, Mitchell Baker, criticized the company’s slow response to the situation. She emphasized the company’s desire to interact with users and the public in order to remain a strong company. According to her, this debacle has been a learning experience that will not be forgotten and will, in fact, serve to make Mozilla a better company overall. She did not, however, announce who the board will be naming the next CEO.

While the issue that created this situation was gay marriage, the deciding factor in Eich’s resignation was his leadership, not his political views. When faced with a situation regarding his employees, he failed to handle the situation effectively. When the situation escalated to include the public, he similarly failed. Corporations without good leading management are not corporations that do well. Thus, the Mozilla Firefox CEO did not just resign over gay marriage; he resigned over his stunning lack of leadership.