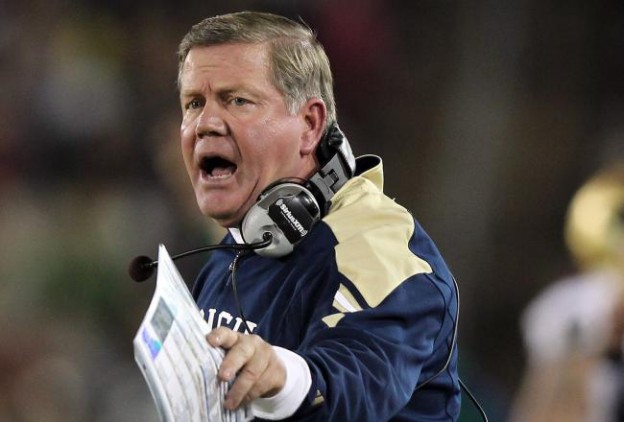 This year’s Fighting Irish squad looks to have significant potential. The offense is littered with young, albeit relatively unproven talent. There is plenty of speed at the skill positions and depth along the offensive line. Whether the offense can play up to its potential remains to be seen. However, it is the defensive side of the ball that is the real question mark. Notre Dame’s defense is in transition, and there are a lot of potential problems on that side of the ball.

In terms of preferred style of play, it seems the two coaches could not be more different. Diaco was not too aggressive in his play calling. This style worked well in 2012, when there was a dominant defensive line to create pressure and a Heisman contender at inside linebacker to take away the middle of the field. However, things did not work out nearly so well last season. There were injuries on the defensive line and not as much experience or athleticism at inside linebacker. Also, Notre Dame’s defensive strategy was predicated on good performances in the red-zone. While the red-zone defense was excellent for the most part in 2012, it was not exactly spectacular in 2013. To make matters worse, when the Irish did blitz, they often telegraphed their intentions, failed to adjust, and gave up easy yards as a result.

It really seems like Brian Kelly has decided to go the opposite direction with the new coordinator hire. VanGorder is known for his aggressive style of defensive play-calling. Most of the interviews from the Blue-Gold game seemed to indicate that VanGorder intended to carry this aggressive tendency into South Bend. There has been more of an emphasis on speed for the Notre Dame defense this off-season as well as some speculation (hope?) that the Irish will use more sub-packages on defense.

Nevertheless, there are some potential pitfalls. For one thing, it will not likely be easy for Notre Dame’s defense to transition into an entirely new mind-set and scheme. The new coordinator is known for his blitzes and multiple personnel packages. However, the past few years, the Notre Dame defensive game plan has tended to be rather simplistic. It will be interesting to see how long the adjustment period is for the defensive players. The defense will also have to drastically improve on the blitzing for next season if the coaching staff wants that aspect to be a major part of the game-plan.

Another major issue is depth, or lack thereof. The front seven will be losing major contributors and there just seems to be a lot of unknowns. The depth at linebacker is particularly concerning. Sophomore Jaylon Smith has already proven himself, but the other linebackers will need to step up in a major way if Notre Dame is going to have much success next season. There is talent on the defensive side of the ball, but much of it is unproven.

As far as the spring game goes, it is hard for a fan to take too much out of the performance. The defense did give up some big plays, but they also got several “sacks.” Of course, because of no tackling of the quarterbacks in the spring game, it was difficult to determine which plays would have actually been sacks in a real game.

Notre Dame’s defense is in transition. There are plenty of pieces to work with, but there will likely be growing pains along the way. The good thing is that there are less expectations for that side of the ball as compared to last season. Therefore, the Irish have a chance to surprise some people.