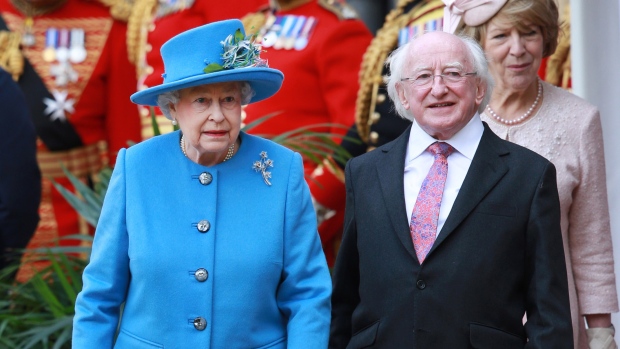 Queen Elizabeth II of England welcomed the Irish President on his historic state visit to Britain Tuesday, making it possible for further reconciliations between the Republic of Ireland and the English Crown.  Irish President Michael Higgins’ four-day visit to Britain will coincide with the 16th anniversary of the Good Friday Agreement signed by England and Ireland in 1998.

A main specification of the Good Friday or Belfast Agreement, stipulates in part the relationship, status and system of government of the Republic of Ireland as it relates to the United Kingdom and Northern Ireland. The Republic of Ireland has had a long and antagonistic history with Queen Elizabeth’s British government which resulted in the Irish War of Independence in 1919, when Ireland’s victory against the British government made it possible to break away from the United Kingdom. A result of the war was the partitioning of Ireland in 1921 to create the British territory known as Northern Ireland.

Hostilities between the two nations have since eased due to their shared history, culture and economic partnership. The ceremonial welcoming of the Irish President by Queen Elizabeth II further cements the lasting bond between the two island allies. In a speech to both houses of Parliament, Higgins remarked about the closeness of the two island nations which once seemed impossible.

At a banquet for the Irish President at Windsor Castle, Queen Elizabeth referred to the United Kingdom and Ireland as “neighbors and friends.”  The Queen also stated that the two nations “should no longer allow our past to ensnare our future.” Three years ago, her Royal Highness, Queen Elizabeth II, became the first British Monarch to visit the Republic of Ireland.

Greetings were extended to Mr. Higgins at the Irish Embassy in London by Prince Charles, after which a welcoming at Windsor Castle was marked by a 21-gun salute with the full regalia of a military band and British troops. A visit to Westminster Abbey followed and, as customary, a wreath was laid at the Grave of the Unknown Warrior, which is the tomb of a British soldier of the First World War.

Before the historic visit ends on Friday, President Michael Higgins will attend 10 Downing Street to have a meeting with Prime Minister David Cameron. The President is also expected to honor the work of Irish health professional in London, and have a discussion with London’s Mayor, Boris Johnson.

The meeting between the Irish President and the Crown came just days after Queen Elizabeth II embarked upon another historic meeting with Pope Francis in Rome. The Queen’s visit to Italy was at the invitation of Italian President Giorgio Napolitano. Pope Francis, head of the Catholic Church, gave a warm and gracious welcome to the head of the Church of England, Queen Elizabeth II. Britain’s ambassador to Vatican City, Nigel Baker, told Vatican radio that looking back at Queen Elizabeth’s reign, it is remarkable how far the relationship between Britain, the Anglican Church and the Catholic Church has developed since she became queen in 1952.