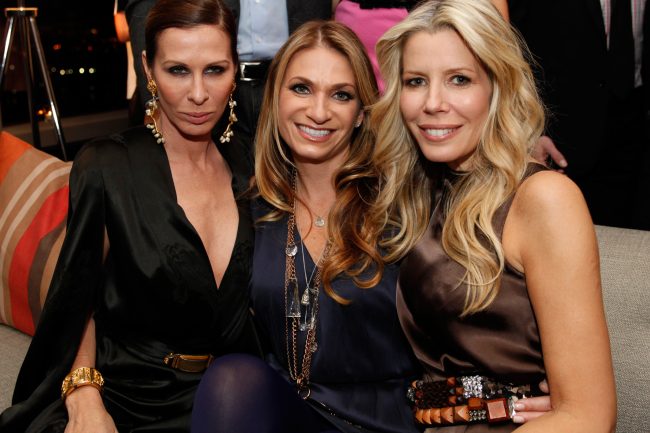 This season, on the Real Housewives of New York (RHONY), a major brawl broke out between Aviva Drescher and Carole Radziwill regarding the writing chops of each. Housewife, mother, philanthropist and now “author” Aviva wrote a memoir of her life including the loss of her leg at the age of six. Carole, a professional author, journalist, and princess wrote a best-seller that topped The New York Times Best Seller List for 20 weeks about her late husband’s battle with cancer.

Aviva recently wrote and published her first book, Leggy Blonde, an account of her life since the amputation of her leg due to an accident involving farm equipment. While very proud of her accomplishment, not all Housewives felt the same, especially Carole, who takes her writing career very seriously. Carole felt that it was wrong for Aviva to label herself an author when she had actually used a team of ghostwriters to pen her memoir, and she expressed this sentiment to Aviva, who did not take kindly to Carole’s know-it-all attitude.

Aviva never denied that she relied on a team of expert writers to help her write her book; she openly stated that it took a lot of people to get the finished product out. Carole, who spent years working for ABC covering hard-hitting news stories on events from all over the world, felt disrespected by Aviva for not taking her life’s work as a journalist seriously, and she said as much. Aviva is now claiming that she is an author when, in fact, she has only written one memoir with the help of ghostwriters, who go unnamed and receive no credit for their work. Real Housewives of New York always keeps viewers on their toes with all the banter.

Aviva claimed that she had heard that Carole had, in fact, used ghostwriters herself to complete her first book, which did not sit well with Carole, because as a professional writer she has no need for any assistance in the writing department and would never rely upon anyone else. Carole feels that her writing career is all that she has compared to Aviva, who has a loving husband and four children to care for.

Carole’s career as a professional writer defines her, because she never remarried after losing her husband to cancer and never had any children, unlike Aviva. Carole took great offense to Aviva trying to claim that she was of equal standing with her as an author, along with the fact that Aviva was also trying to smear her name as a legitimate author by saying she had used ghostwriters when she hadn’t. These kinds of fights are very typical of the Real Housewives franchise.

Both women feel strongly that they are right and have taken their dispute to the other Housewives to argue their case, putting the rest of the cast in an awkward situation. While some side with Carole, because she is a professional writer, others feel that she is being overly dramatic and should be happy for Aviva’s recent literary success.

In the case of Real Housewives of New York: Avivis Vs. Carole: who’s “write,” these days anyone can “write” a book whether by their own efforts or with the help of ghostwriters. The average reader doesn’t know the difference anyway; they just want to be entertained with a good book, no matter which Housewife wrote it.