Robots Laid Off at Toyota 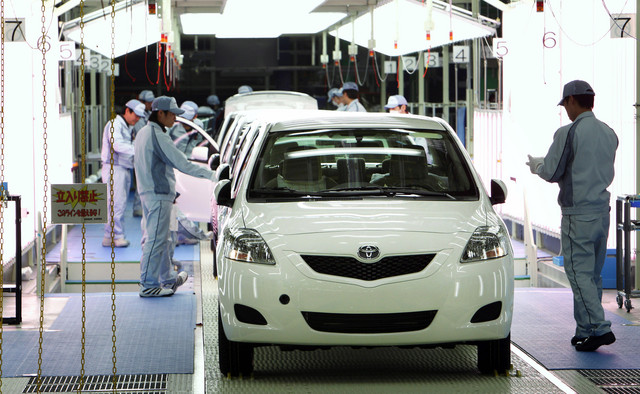 In a move symbolic of an era when human craftsmanship was prized, President Akio Toyoda of Toyota Motor Corporation has decided to lay off robots from some plant operations at the oldest Toyota plant in Japan. In their place, humans have been put back to work, learning the craft of car making the old-fashioned way. It is a move to return to the basics, focus on manual skills, and go back from ‘growth’ model to ‘quality and efficiency’ model. To show that this commitment is real, he has put a three-year freeze on all new car plants.

This move is not surprising in a country where executive salaries is not the top concern, or for that matter, the shareholders’ profit. Instead, first preference is given to workers’ job satisfaction, and producing quality products. The goal is to bring back the innovative approach, and empower the workforce to learn their craft not by watching the machines do the work for them, but to take active interest in honing their own skills. Despite the impact Toyota shares may feel from this change, it is a move that addresses the long-term concern of producing quality products, and making sure that humans continue to play a superior role, at least at Toyota plants.

Stepping back from Toyota laying off its robots however, and looking at the bigger picture of the robotic craze happening in the world today, one should also consider if humans are becoming too reliant on machines. They do have an essential role to play in the human saga. However, they also have one common point of failure. Their instruction manual is designed by humans. No matter how much we try to automate things, have them do our daily chores, or build our cars, it seems humans have unrealistic expectations from what they can, or should do. Are we to assume that there will come a time when robots will run the world for humans? Where does this stop?

The technological advances made in the last decade points to a future that seems fascinating, unrealistic, and perhaps even a little scary to some. Dr. Peter Diamandis from Singularity University said, “The world is no longer changing every 100 years.” In fact, some in his circle believe Artificial Intelligence (AI) and robots will replace humans within a decade, and that AI will take over half of all jobs that humans do today. Only time will tell if these bold predictions will come true, but what is certain is that not all will be ready for this monumental change.

There are things that no matter how tedious they may seem, still beckon us to do, and learn, and do them better. The Utopian model of humans lying around while intelligent machines do all the work is something that can only be believed when it happens.

Human fascination with AI is likely to continue, and the technologies in the coming years may wow us, help us, even endear us, but they do not have the human spirit. A robot can be programmed to show kindness, empathy, sorrow, and all the other traits that are so human. Nevertheless, it would be a mistake to think that the software responsible for these acts is the same “software” running in humans, or any other life form for that matter.

Perhaps the move to lay off robots at Toyota and bring human workforce back where it belongs seems odd. But it also underscores the point that humans must remain at the top of the chain of command. To do that, humans have to be able to deliver better results by making the current processes even better than what was handed off to the robots.

3 Responses to "Robots Laid Off at Toyota"