By Schelett Rickenbacker on April 25, 20142 Comments 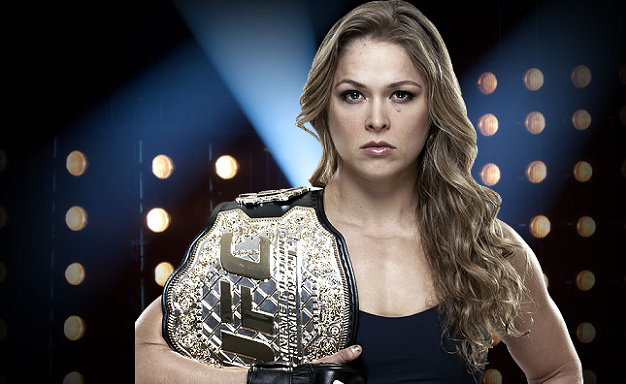 According to Dana White, President of the UFC Ronda Rousey can do what no other boxer could, beat Floyd Mayweather. He expressed his confidence in Rousey through an ESPN news interview. This comment has most Mayweather and Rousey fans slightly pondering the thought. Of course, there is no possibility of this ever taking place. However, that does not take away from how entertaining it is to debate. The two fighters are both undefeated world champions. Beyond that there are not many other similarities between them.

This hypothetical match up has been sweeping the air waves and gaining a lot of attention. It has turned into a hot topic among fighters in every regard. People have already started to take sides. John Rogan UFC commentator, and Jon Jones UFC light heavyweight champ has taken Rousey’s side. They believe the Olympic Judo medalist will somehow get the best of Money Mayweather.

The rational that most of those on the Rousey bandwagon have is the diversity of MMA versus boxing. MMA allows for many different aspects of fighting, as to where boxing just focuses on one. The many different MMA styles and techniques would presumably handicap Mayweather. The only possible validity of this theory comes from a fight between Famer Randy Couture and Toney “Lights Out ” Jones. When Jones was pitted against UFC camp Couture he proved to be out of his element.

From an overall fighting perspective, many things have to be taken into account before making such rash statements. Ronda Rousey is an excellent fighter and more well versed. However, Floyd Mayweather is a seasoned fighter who has mastered his craft. He has made a living taking out all 45 men who crossed his path, not to mention he’s knocked out more people than Rousey has fought in total. Furthermore, there is one main advantage Mayweather has in this hypothetical fight. It is not the obvious fact that he is a man, but it is his flawless defense. A great defense makes for an even better offense. The problem most fighters have with Pretty Boy Floyd is their inability to catch him. What makes Rowdy Ronda any different?

The deciding factor for White in this fight lies in the fact that he has personally seen Rousey throw men and hurt them. That must be the reason why White insist no matter what style of martial arts she will dominate. He goes so far as to say she would not only beat him in a street fight, but also she would really hurt him. On the other hand, he did admit that in a boxing match everyone already knew what would happen.

What does all of this mean to Floyd Mayweather and Ronda Rousey? It means nothing at all according to Anthony Pettis, who says this debate, is “ridiculous.” The very reason this is viewed as ridiculous is, because of the gender factor. Outside of that Woman’s boxing champ Anne Wolfe still felt the need to weigh in saying “ Floyd would beat the s—t out of Rousey, MMA or whatever.” In the heat of debate everyone will certainly pick sides. Nevertheless, at the end of the day Rousey versus Mayweather is nothing more than Dana White’s personal fantasy.