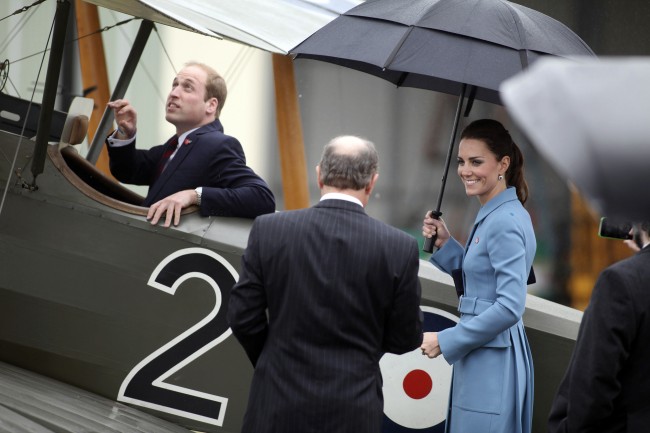 The Royal couple, the Duke and Duchess of Cambridge, are on tour and radiating health and happiness, even though, and maybe because, they walk amid the shadows of Princess Diana. The late Princess of Wales went on the same tour that William and Kate are currently on. From New Zealand to Australia, Diana was the pioneer in keeping the royal family close, as William went on the tour with her and his Father. Also like his Father, Prince George is on tour with his parents. From a yacht race last week to attending an event promoting the 2015 Cricket World Cup their interactions are delighting everyone they meet. 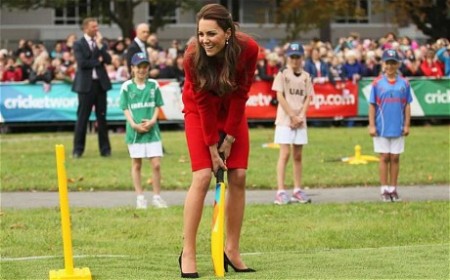 The couple have been having some competitive fun with each other, as the Duchess won over the Duke in the yacht race last week. This defeat prompted the Duke to set out and to show up his wife at Cricket on Monday. The cricket match shows a confident Kate greeting the people in a way reminiscent of the late Diana. Less shy than Diana, Kate appears warm and friendly and completely at ease. That is until William almost hits her with a cricket ball. Thankfully it is plastic and no one was in any danger, but the Duchess wags a finger at her husband just the same. The fashion forward Duchess wore a stunning red skirt and jacket with black heels on the cricket course. One fashion trend that may not catch on.

The whirlwind tour has found the royal couple not only amid Williams mother’s shadow, but enthusiastically following Princess Diana’s hands on approach to parenting. William has been known to state his desire for more children, but no announcement yet, as to when Prince George will get a sibling. The second child in a royal family is jokingly referred to as an “heir and a spare” by the British. Many adventures have been had by the couple thus far, they went on a high-speed jet boat ride down the Queenstown Shotover river and upon exiting the boat, they burst into applause for the expert driving of Wayne Paton. No butterfly’s or wobbly knees for the Duke and Duchess as they appeared to have been none the worse for wear. Amazing considering they had toured the Amisfield winery just prior to the wild jet boat ride. They also took the time to worship by attending church with an astounding crowd of about 4000 people there to greet them. 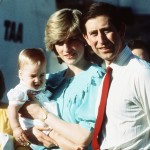 Everywhere they went the people followed, they certainly received a welcome fit for a King. Kate was scrutinized and found acceptance everywhere they went, from her suits and dresses to the charm she bestowed on everyone she met. Travelling with Prince George just as Diana did before her, many wonder if 2 years will be the magic number for Kate as it was for Diana, as Prince Henry is 2 years younger than William. The world will just have to wait and see, and for now, they are touching everyone they meet while on tour, and are getting all that love right back from the people. From Aviation Heritage to playing Crickett the Royal couple are making their mark as they walk among the shadows left by Williams Mom, Princess Diana.