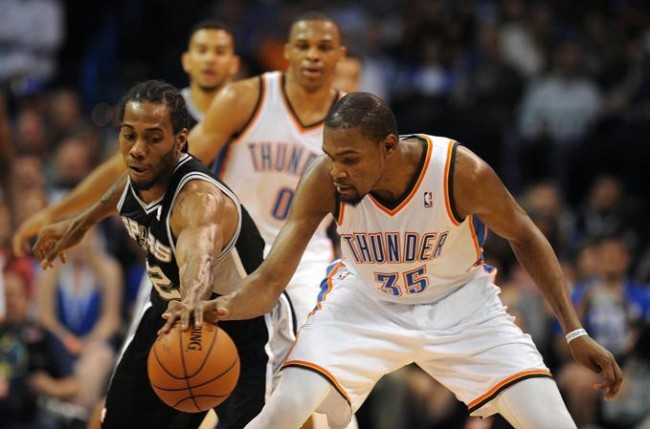 Like the old saying goes all things must come to an end. Therefore, no one is surprised that the Spurs 19 game -winning streak has come to an end. They have finally met their match with Kevin Durant and the Oklahoma City Thunder. It was a close game, but OKC inched pass the veteran team 106 – 94. This win came on the backs of OKC’s star players Kevin Durant and Russell Westbrook. These guys put up all-star performances Kevin Durant scored 28 points, and Westbrook followed that with 27 points.

The end of the Spurs streak says more than a single loss. This loss makes some question if the Spurs can hang with the Thunder. The Thunder has swept the Spurs 4 – 0. With the playoffs coming up so fast, most sports enthusiast are starting to question their faith in the Spurs. If the Spurs cannot beat OKC in four meetings in the regular season, how can they beat them in a best of 7? It is Charles Barkley’s belief that the age of the Spurs will be there undoing.

Some may see the age on this Spurs team as an asset in the playoffs, but it is true that they eventfully get tired throughout the series. Their star player is Tim Duncan who happens to be one of the oldest on the team. In a 7-game series Coach Popovich has to reduce his minutes so he can sustain the upcoming games. However, their starting five consist of two core players and three young players in Kawhi Leonard, Tiago Splitter, and Danny Green. Therefore, they do have some speed to them. That can allow them to partially contend with the faster teams.

Right now, the way the West bracket is stacked the top two teams a going to meet again. It is pretty much a no brainier that the Spurs will see OKC in the conference finals. They are in deed the two best teams in the West. It goes without saying.

The Spurs have witnessed a crushing end to their outstanding winning streak, and they plan on seeking revenge. It is the same feeling the Heat felt when Chicago stopped their 27- game-winning streak. It becomes a quest to divide and conquer their skilled opponent. When the two meet again the Spurs will be a sharper, more durable team. The quickness of OKC can only be matched by the quickness of Leonard, Parker, and Green.

The only way to beat the Thunder is to wear down Westbrook and get him off of his game, and then force Durant to take bad shots.

Cutting off the driving lane for Westbrook will make him reroute his game. He is not a consistent shooter. Daring him to make all his outside shots will influence him to pass the ball more often. He is the kind of player that can move well without the ball, but prefers to have at least two touches per possession.
The ability to make Durant take a bad shot comes from making him earn his shots in the paint. Sure he is a skillful interior player, but the constant need to drive to the paint every possession will tire him. When Durant is tired his shot suffers, and he is easy to stop down low.

The reason for focusing on these two guys is they stimulate the offense on the Thunder roster. When Westbrook and Durant are off their game the whole team is. Without the scoring presence of James Harden off the bench they have no alternative core player. This is not to discredit the contributions from Thabo Sefolosha, Carron Butler, or Surge Ibaka. These guys are key players, but they are not known to take over a game and spark offense. They are excellent role players that do the intangible things that keep the game close. Shutting these guys down will not directly ensure complete dominance.

The Spurs cannot run with this team all night. Therefore, Duncan has to give Durant a hard time off the dribble, and Parker must apply pressure on defense. Parker is famous for having good hands, and pressuring the ball can create turnovers. Overall, applying all these methods could make for a more dominant appearance against the Thunder.