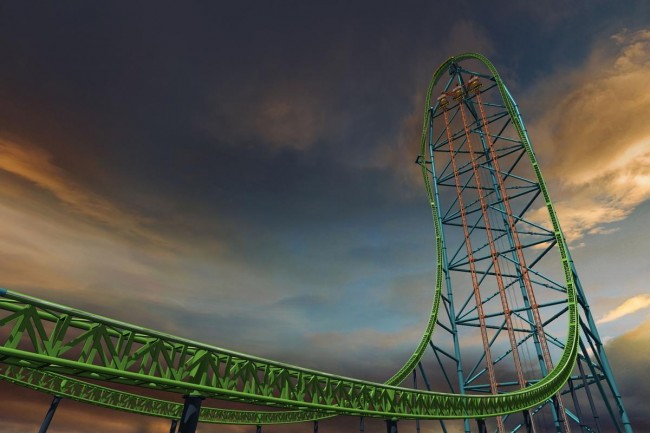 New Jersey’s very own theme park Six Flags Great Adventure, which is located in Jackson, has just finished laying down the final piece of steel on top of the tower belonging to its newest ride attraction, the safari-themed Zumanjaro: Drop of Doom. It is said to be the world’s tallest drop ride, topping out at 41-stories high.

Zumanjaro, which is double the height of the Statue of Liberty, lifts its riders to the top for a stunning aerial view of the park, and then pauses for a few moments, before accelerating straight back down to ground level in less than 10 seconds at a staggering 90 mph. The drop ride will have three gondola towers, each able to carry as much as eight riders.

The ride was built as an attachment to a rollercoaster called Kingda Ka. It was the tallest and fastest roller coaster in the world, when it made its debut at the Golden Kingdom in the New Jersey park at 456 feet high, and topping out at 128 mph. Because it moves so quickly, the entire ride is over in less than a minute, at exactly 50.6 seconds long. Since the drop ride was built in the middle of the roller coaster, riders on Zumanjaro will be able to witness the trains of Kingda Ka speeding around its track, directly nearby.

It is also reported that while people wait in line to ride the Zumanjaro, they will also get a view of the animal area, where they can watch African Anubis baboons play.

To build their newest ride Zumanjaro: Drop of Doom, Six Flags removed the popular Rolling Thunder, which was a wooden roller coaster. The coaster was built in 1979 and had operated until last year, when it was shut down and removed for good in early September. Park officials mentioned that the wooden thrill ride had been decreasing in popularity  over the years, since its debut, as people passed it over for more recent and more thrilling roller coasters.

Six Flags Great Adventure park officials said that now that the structure has been topped off, workers need to install some more things for the ride, including gondolas, controls for the ride, and the lift mechanism. Afterwards, it will need to be subjected to a series of different, multiple certifications, inspections and tests before it is opened for public use.

“This is a special day,” Park President of Six Flags Great Adventure, John Fitzgerald said on April 1. “Not only did we break the record by topping off the tallest drop ride in the world, but we also braved the weather. This winter was the coldest and snowiest winter we can remember.” Fitzgerald also said he wanted to thank the team who worked on construction for their ability to overcome such adverse conditions and finishing the job.

The park of Six Flags Great Adventure opened to the public for the season on Saturday, April 12 and the new ride Zumanjaro: Drop of Doom is expected to be ready by Memorial Day weekend. This year, Memorial Day lands on May 26.