Tornadoes Leave Behind a Death Toll 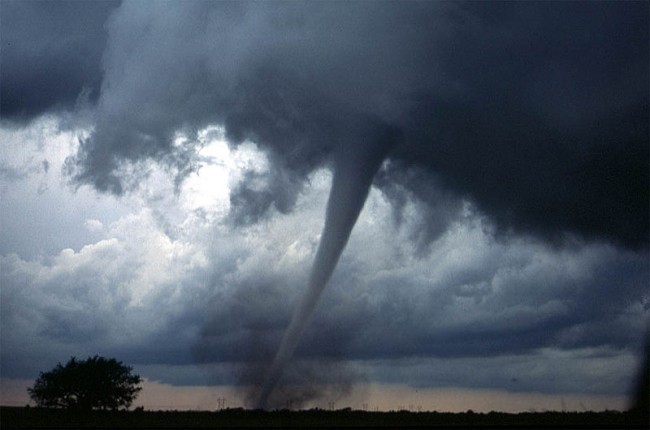 Tornadoes touched down in the town of Quapaw, Oklahoma Sunday April 27, 2014, leaving behind a death toll of two, and blazing a path of carnage and turmoil, especially on the north end of the quaint town where it brutalized the neighborhood with its staggering force. In Johnson County, Oklahoma, hail the size of a grown man’s fist lashed the countryside, while in Craig County monstrous winds tore off roofs and ruined other structures in the area. Other parts of Oklahoma were warned about excessive rainfall causing flooding.

Another tornado was reported touching down near Little Rock, Arkansas, sticking around into the evening and laying waste to property along a 30 mile patch of land. A twister was also said to have touched down somewhere near Hume, in western Missouri, and Prescott, Kansas. Residents’ northeast of Hume were on the lookout for tornadoes. In west central Missouri golf-ball sized iced globules combined with 60 mile per hour winds pelted the region. Meanwhile, 30 miles east of Kansas City, on Interstate 70, sometime around 1 P.M., a semi was tossed onto its side by raging winds, with no one injured. In the Kansas City area, power was knocked out to some 5,000 houses and businesses on Sunday morning, but which was repaired by that evening. Lafayette and Ray counties also reported electrical outages during the weathers wild swath through their neck of the woods.

Television coverage by way of a road north of Little Rock, Arkansas displayed busted vehicles and bare trees, deprived of their foliage and limbs between the suburbs of Maumelle and Mayflower, on Interstate 40. Although the tornadoes tore through the communities, it did not leave behind a death toll. A barn in southeastern Iowa was lifted off its foundation and wounded a single person when it fell over in a burst of 60 mile an hour winds. The most tremendous risk for powerful twisters is traversing most of Arkansas and maybe into western or central Missouri. The risk of tornadoes gains strength over time in a range from Omaha, Nebraska southward to Louisiana, focusing on an area from north central and eastern Kansas, western and central Missouri, central Nebraska and southern Iowa. Tornado watches, where twisters may come to fruition but are not labeled a direct danger, were being set up all across the Great Plains region and heading southeast.

In expanses where cyclones usually do not appear, some areas were being pelted with over-sized hail and winds that had the potential to reach speeds of 75 miles per hour or more. Also, places that do not get twisters can still be besieged by torrential hail and horrendous down-bursts. Central and northern Georgia may storms and heavy rain while Alabama may get heavy rain and flash flooding. The threat of the storm front continues on Monday and Tuesday, with the jeopardy of tornadoes swarming as far east as the Carolinas and then moving towards the west end of the Florida Panhandle. As the system moves towards the east coast, the hazard of tornadoes leaving behind a death toll may lessen as the danger level dissipates with the weather.

One Response to "Tornadoes Leave Behind a Death Toll"