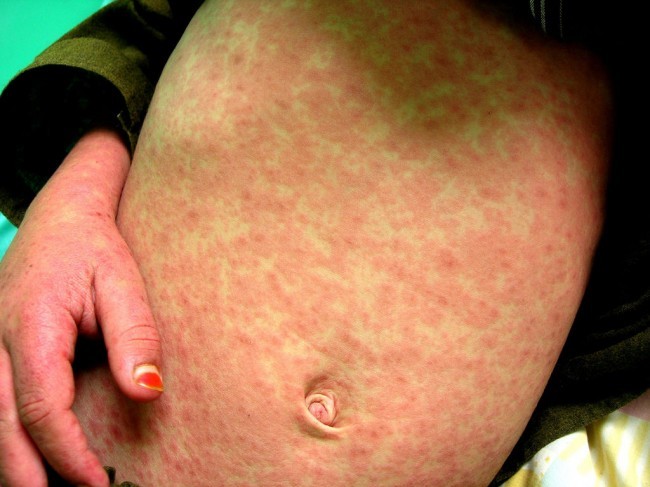 An outbreak of measles that has been linked to a Kings of Leon concert, which was held in a venue with a capacity of 17,000 on March 28 in Washington State, has fans who attended the performance alongside a woman with measles on edge.  State health officials have released a statement regarding the outbreak and are asking that those who attended the show who do not have immunity from the disease due to vaccine or previous illness get tested for measles.

According to health officials, a woman contracted measles on March 26 when she visited a Whatcom County family who had been exposed to the disease during an outbreak in British Columbia.   A full itinerary of the woman’s movements has been released by health officials, who are encouraging anybody who were in the same locations as the woman during her time spent there or within two hours after she left.  Those who have not received the measles vaccination can contract the disease by simply walking into a room in which somebody with measles had been within the past two hours.  Officials are encouraging anybody who visited these areas in the same time frame as the woman in question to ensure that if they have not had measles before, they have been vaccinated against the disease.  Those who may have had contact with the woman who have not been vaccinated or are not immune are urged to visit their doctor as soon as possible.

The woman visited the Washington counties of Whatcom, King and Pierce.  On three of the days between March 26 and March 29, she worked shifts at a bakery.  She visited a liquor store and a gas station in Whatcom Station on the 28th, continuing on to King County in order to attend the Kings of Leon concert at Key Arena.  While in the area, she stayed at the Best Western Loyal Inn and visited the Wasabi Bistro after the concert.  On her way out of town the next day, the contagious woman visited a cafe, a Suzuki dealership, a Starbucks and the Pike Place Market.  She then visited Pierce County, making stops at Celebrity Cake Studio, LeMay Car Museum, Harmon Brewing Company and Eatery, Safeway and K-Mart.  Time frames for her visits are available online at the Washington Department of Public Health website.

Measles is very contagious and can be spread to others up to four days before the well-known rash appears and up to four days after the appearance of the rash.  Measles has an incubation period of eight to 12 days.  At first, the disease presents as a severe cold, with the patient suffering from a high fever as well as sneezing, sore throat, runny nose and coughing.  Other signs may include diarrhea, sore and red eyes, fatigue and swollen lymph nodes in the neck.  As those symptoms begin to dissipate, a rash will begin which will cover the entire body.  Adults with measles tend to have more severe cases of the disease, which can cause miscarriages or premature deliveries in pregnant women and can even be fatal.

Recent outbreaks of a disease long considered to be controlled have been linked to anti-vaccine movements which question the importance of vaccines and believe them to cause autism, leading parents to make the decision to not vaccinate their children.