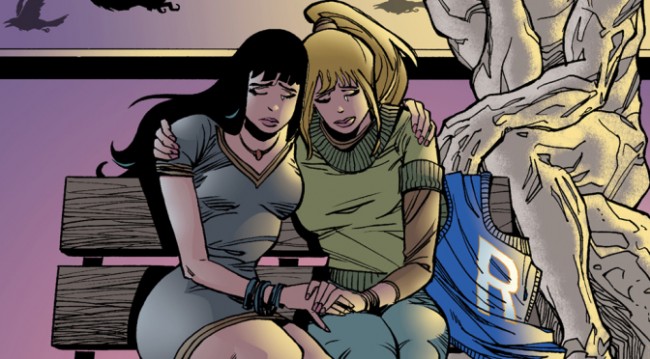 Archie Comics has announced the upcoming death of Archie Andrews this week, gleaning shock from fans and critics of the comic. Andrews will die in both parallel universes featured in the comic’s Life With Archie series, leaving Betty, Veronica and the whole Riverdale gang to mourn in the follow-up issue. While the death of both versions of Andrews will end the Life With Archie narrative, the future of the franchise will see writers, such as Girls creator Lena Dunham, continue to breathe new life into the characters in alternate storylines. Does the death of Riverdale’s favorite redhead mean a more progressive future for the franchise?

It is not the end of Archie comics or Riverdale, as both the character and the fictional universe will continue on in other branches of the comic. The writers are simply exploring one possible ending to the story of Riverdale’s golden boy.  One thing is for certain; the Archie franchise is in desperate need of re-branding to make it relevant to today’s readership. Perhaps killing off Archie will open the door for new writers to explore more current themes, as opposed to introducing progressive characters only to watch them get stifled in traditional story lines. With Lena Dunham set to pen a 4-part Archie comic series in 2015, who knows what the future will hold for Archie and the gang?

This is not the first time Life With Archie has included controversial subject matter. In 2010, the comic franchise raised eyebrows when it introduced Kevin Keller, its first openly gay character, in an attempt to bring the comic into the 21st century. While including a gay character in the comic was a positive step in exploring diversity, writers fell short when it came to exploring alternative lifestyles in a culturally significant way.  Besides his sexual orientation, the Keller character was extremely conventional. He served in the United States Army and married his long-time boyfriend, Clay, after being wounded in battle. Alas, endeavoring to get with the times, writers sprinkled controversial characters onto the backdrop of an extremely conservative reality. Gay or straight, gender stereotypes and mainstream heterosexual norms have always thrived in Riverdale, and it will be interesting to see if a writer as edgy as Lena Dunham will be able to shake things up a bit.

The death of Archie Andrews could usher in a new era for the comic, one that takes bigger risks with its character developments and storylines. Archie comics have been deeply rooted in patriarchy thus far, featuring wildly stereotypical gender roles and traditional lifestyles. Historically, the comics represent an impossible and unattainable ideal, however the death of Archie and the prospect of Dunham’s creative influence in penning the new issues suggest a more diverse future for the Riverdale gang. Could this be the beginning of more multi-dimensional, slightly darker characters?  Will Betty and Veronica finally talk about something other than Archie? Archie fans are waiting patiently for a fresh take on the long-running comic.

In 2012, when the Archie comic franchise released an alternate story line which featured Archie in an interracial relationship with Valerie from The Pussycats, CEO John Goldwater said: “Riverdale welcomes everyone and always will.” But Riverdale has its set of traditional beliefs to which all characters, regardless of their demographic, adhere. For example, Archie marries the leading lady in each universe and even the gay character is introduced only to adhere to heterosexual norms. Maybe the death of Archie Andrews will open the door to an even more diverse future for the comic. Maybe Lena Dunham will use this opportunity to write “Archie, Betty and Veronica Share an Alternative Lifestyle,” “Jughead Has Gender Reassignment Surgery” or “Betty and Veronica Talk Gender Politics.” Archie will die a hero in Life with Archie #36, which will hit the stands in July.