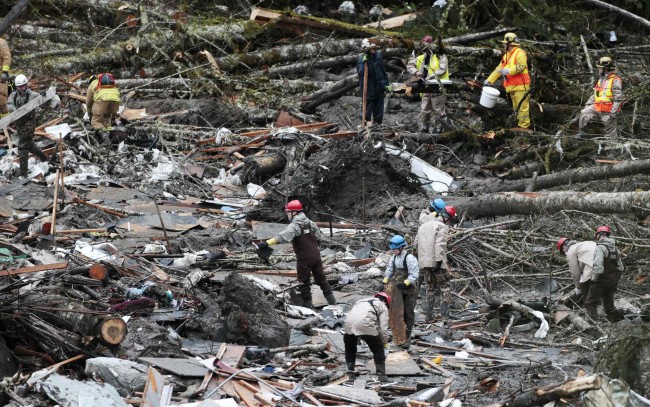 On Friday, a landslide in the region of Badakhshan, northern Afghanistan covered hundreds of houses while it also uproots the remaining survivors from their way of life. The actual number of people either dead or missing is hazy, although some estimate the numbers range anywhere from a couple of hundred to almost 3,000. Afghan representatives and the United Nations have stated that just over 300 brick and mud houses had been buried. It was being said that what amounts to a whole village had been swept away, with entire families being lost and the survivors in dire need of help. Information was slow in coming out of the region that borders Tajikistan, leaving exact numbers unknown.

On Saturday, a load of 60 tons of food showed up in Badakhshan and surrounding area from Kunduz Province, which neighbors northern Afghanistan. The aid was a welcome relief for the many people who lined the perimeter of the disaster area. Afghan officials flew to the site on Saturday morning, delivering blankets, tents and cash to the legacy left behind in the landslide that uprooted its survivors in Afghanistan. A balance of $1,000 was being offered for each family member that passed away. The government has promised to help the survivors of the mishap by handing out 230 tons of flour and wheat to lessen the need experienced by the remaining people.

Saturday was also an industrious day for relief workers. They were busy giving out food, setting up shelters, and distributing medical supplies and water to some 4,000 distressed residents of the slide. The task was made harder due to the fact that the remote area is mostly inaccessible by vehicle. The American military is on standby to render assistance in the event they are needed, but as of Friday, their services had not been required. However, due to America’s troops pulling out of Afghanistan, they could be restricted to what types of support they could render.

Since Friday, the bodies that have been recovered have been mostly those who would have been in their homes when the slide hit. People who escaped the horrific event were thought to be able to run when the incident took place. Although rescue efforts continue to recover many bodies, and hopefully living relatives, the fact that the village is under about 200 feet of sludge is leaving many people skeptical. This latest landslide is one of many environmental disturbances that Afghanistan has undergone in the past two weeks, which uproots its survivors and leaves many dead or injured. Afghanis have experienced an earthquake, flooding and a mine explosion, but the landslide on Friday may be the most dramatic disaster yet.

The United Nations is focusing on the survivors of the Afghanistan landslide that uproots its large population from their homes and families. Villages that were thought to be at risk were being evacuated, amounting to over 14,000 more people. The U.N. proclaimed that medicine, shelter, food and water was needed the most to help alleviate some of the stress that survivors are under. Assistance was being rushed in to help with relief efforts as local villagers and officials used what they had at hand to try to dig would be survivors from under the earth. However, due to the sheer volume of earth that the rescuers have encountered, they feel that the chance of finding anyone alive is very small.