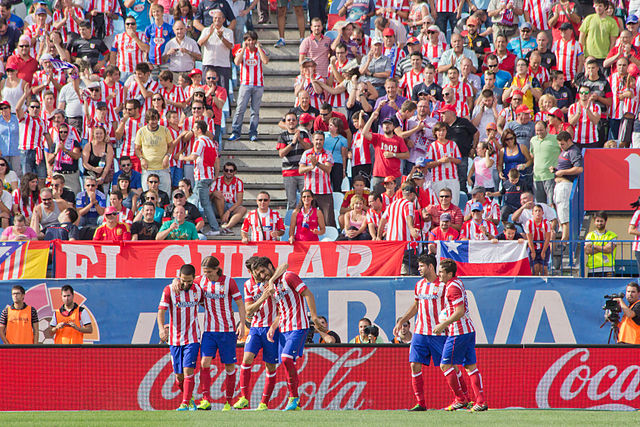 Atletico Madrid will play Barcelona FC for La Liga title in Spain on May 17. Atletico is currently in first place with 89 points while Barca has 86 points. Next Saturday, the two teams who are on top of the Spanish league will face each other at Camp Nou, Barcelona’s home, to see who will take La Liga title. Despite playing as host, Atletico Madrid will at least need to tie the game in order to win it.

Atletico had the chance to win La Liga on Sunday afternoon, but the game against Malaga ended in a 1-1 tie. Atletico fans were feeling the suspense when Malaga took the lead in the second half. The goal was scored by striker Samuel in the 65th minute. Atletico Madrid responded nine minutes later with a goal by Belgian defender Toby Alderweireld.

Malaga had Argentine defender Marcos Angeleri red carded in the 88th minute for a double warning. This gave Atletico some time to make another goal, but Malaga persisted defensively and did not allow another goal from their adversaries.

Atletico Madrid, at home, dominated the game against Malaga. Atletico controlled the ball more and had more chances to create goals. The difference was 56 percent of ball control compared to Malaga’s 44 percent. Also, Atletico shot on Malaga’s goalkeeper Wilfredo Caballero 17 times, while Malaga only had 10 shots on Atletico’s Belgian goalkeeper Thibaut Courtois.

As for Barcelona, the chance to catch up closer to Atletico on Sunday afternoon was blown away. Barca, as visitors, played Elche and ended up with a scoreless tie. If Barcelona would have won, Barca would have only been a point behind Atletico Madrid. Barcelona, of course, dominated Elche with shots and ball control. However, the chances to score never resulted into anything.

In that game, Barcelona has it harder than Atletico Madrid. See, Barca is forced to win since they are three points behind. Atletico could either win the game or, because they will be in Barca’s stadium, they could play for a tie. If Barca wins, both teams will have 89 points, but, since Barca’s goal differential is higher, Barca would take the title.

Atletico Madrid’s year has been outstanding. The team has a shot to win two titles this season. One chance is for Atletico Madrid to win the title as La Liga champions, and the other is to win the UEFA Champions League Cup against same-city rivals Real Madrid that will be held on Saturday, May 24, a week after facing Barcelona FC. It will be a difficult task for Atletico Madrid, as they will be facing the top two best teams from Spain. In fact, Real Madrid and Barcelona are among the best in the world, and Atletico has to face them both for the next two weekends.