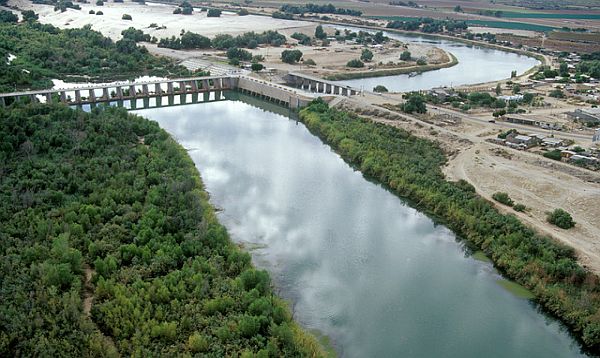 The Colorado River reached the Sea of Cortez today in an event that marked the quenching of a decades-long drought in the region. According to reports, water had not flowed consistently into the Sea of Cortez for more than 50 years. Today’s event is said to bring a stable water supply to 200,000 households and will also help to restore ecological conditions in the Colorado River Delta. Water and environment aside, the 2012 agreement between the U.S. and Mexico that joined the two bodies of water, referred to as Minute 319, begins a new chapter for international relations between the two countries. The collaborative effort between both countries has extended to involve non-governmental groups, and will bring together scientists and experts from around the world to help maintain long-term, forward progress.

Before Minute 319 went into effect, the 1944 U.S.-Mexico treaty that governed water allocation of the Colorado River had come under scrutiny. Under the old agreement, Mexico was granted 1.5 million acre-feet of river water per year, with the only caveat being if there was a drought. As water reserves in Lake Mead, a Nevada-Arizona reservoir along the Colorado River, began to significantly diminish as a result of drought, a mutual agreement was sought after that would satisfy U.S. regional and international obligations. Both countries felt the effects of the drought, however the 1944 treaty allowed for the U.S. to withhold its reserves.

Following an earthquake in 2010 that damaged canal and irrigation systems in Mexicali Valley, the effects of drought were felt with more intensity. Under Minute 319, which will last until 2017, several points of contact were conceived that bind together the two countries in times of drought and surplus. To that effect, Mexico has agreed to receive a lesser amount of water during drought, but will be allowed to store water in Lake Mead when there is surplus. In addition, Mexico can request up to 40,000 acre-feet of water when the levels of Lake Mead exceed a certain surplus level. For Colorado River project manger of the Central Arizona Project, Chuck Cullon, the international agreement is about fairness and about each country’s pledge to share in the other’s circumstance, whether in drought or surplus.

To address the aftermath of the 2010 Mexicali Valley earthquake, California, Arizona, and Nevada water municipalities agreed to provide monetary aid to help rebuild infrastructure and jump-start water conservation programs in Mexico. The trade off: Mexico agreed to share the water that the conservation projects would hopefully save.

Today’s meeting of waters from the Colorado River with the Sea of Cortez marked the beginning of an ecologically-focused initiative in the Colorado River Delta to improve and restore the riparian habitats that once prevailed the region. The region’s habitat is internationally significant because it provides a crucial haven for migratory birds. Under Minute 319, water is now allocated to the wetlands in the hopes of replenishing the 90 percent of it that had been lost over the years.

Altogether, the Colorado River has become internationally significant because it symbolizes the collective effort of two countries as they strive to overcome the effects of a water shortage. For Jennifer Pitt, director of Colorado River Project’s Environmental Defense Fund, the success of one such instance of collaboration will hopefully pave the way for future cooperation between the two countries.

Colorado River Brings Hope for U.S. Mexico International Relations added by Courtney on May 16, 2014
View all posts by Courtney →