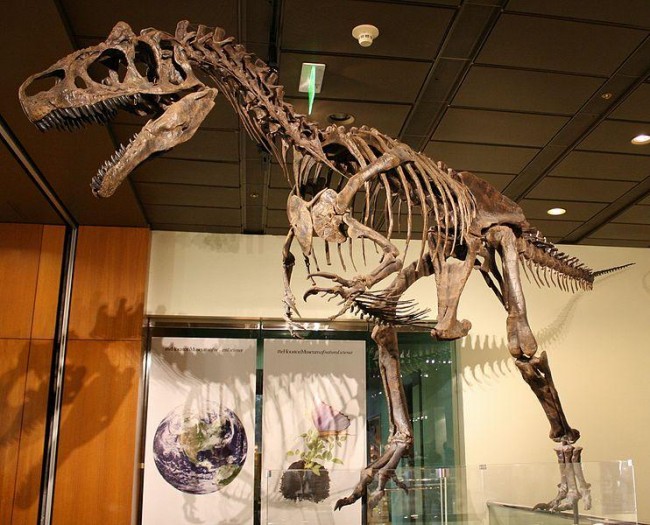 The Creation Museum in Kentucky claims that an Allosaurus skeleton in their dinosaur exhibit proves Noah’s Flood happened about 4,300 years ago. The Allosaurus fragilis specimen, nicknamed “Ebenezer,” has been valued at $1 million. Currently, it’s on display in a secion called “Flood Geology,” but the fossilized skeleton will be the centerpiece of an exhibit called “Facing the Allosaurus.”

The age that scientists at the Natural History Museum of Utah place the Allosaurus remains at is quite a bit older than the estimate of the good folks at the Creation Museum. They say that the Allosaurus skeleton is from the Late Jurassic period, and that the North American predator roamed the land that would eventually come to be called North America anywhere from 150 to 148 million years ago.

The Allosaurus specimen is not a complete skeleton, but it is remarkably well-preserved, containing approximately 50 percent of its original bones, now in a fossilzed state. A press release put out by the Creation Museum states that Ebenezer is around 10 feet high, and 30 feet long. The skull of the Allosaurus is close to being complete, and it contains 53 teeth.

The president of the Creation Museum is Ken Ham. According to Ham, the dinosaur skeletons he’s seen in museums “like the Smithsonian in Washington, D.C.” have been “used for evolution.” However, he says that the Allosaurus specimen that the Creation Museum now has, Ebenezer, will be used to “expose the scientific problems with evolution” and “help us defend the book of Genesis.”

The Allosaurus skeleton was discovered in a rock outcrop in the northwestern-Colorado section of the Morrison Formation, according to the Answers in Genesis and Creation Museum geologist, Andrew Snelling. The Dinosaur National Monument, according to the National Park Service, is a part of the Morrison Formation. The rocky outcropping contains many fossilized specimens from the Late Jurassic.

Snelling, however, disputes that the Allosaurus fossil at the Creation Museum is as old as other scientists have claimed. He believes that a better explanation is that the Allosaurus was likely attempting to escape a global flood — Noah’s Flood — when it got carried away by the flood waters and was buried by sediemnt and debris some 4,300 years ago. At a future date, Snelling has stated that he’d like CT scans performed on Ebenezer.

Scientists estimate that the last dinosaurs died approximately 60 million years ago, rather than 4,300. Also, the last known Allosaurus dinosaurs, according to scientists, became extinct sometime in the Late Jurassic. There are no Biblical accounts of dinosaurs being hunted, or bearing down upon villages, in an attempt to get easy prey, though Ken Ham believes that the Allosaurus skeleton exhibit will be useful in revealing the truth about dinosaurs, according to Genesis.

Recently, there was a debate between Bill Nye, the “science Guy,” and Ken Ham, held at the Creation Museum. The debate drew worldwide attention, with the vast majority of people coming away convinced that Bill Nye was the winner.

Bill Nye argued that if dinosaurs were attempting to escape a flood, they would have tried to get to higher ground. There would be a lot of them, concentrated together, when the flood waters hit them, and their bones would be found today in the middle of other animal bones from a later era. Nye stated that this didn’t happen, so the dinosaurs didn’t perish due to a global flood.

According to Daniel Phelps, the president of the Kentucky Paleontological Society, Ken Ham and others who operate the Creation Museum didn’t gather together enough facts when they reached the date of 4,300 years for their Allosaurus specimen.

The ministry Answers in Genesis supports and owns the Creation Museum. It is one of their beliefs that humans and dinosaurs lived side-by-side with each other, despite dinosaurs not receiving much, if any, coverage in the Bible. Some people who argue differently maintain that the “Behemoth” and “Leviathon” of the Bible are dinosaurs.

According to a press release from the Creation Museum, the Allosaurus skeleton they have on display serves as “a testimony to an extremely rapid burial,” which must have meant that it was the victim “of the global catastrophe of a flood.”

The Allosaurus skeleton on exhibit at the Creation Museum in Kentucky will be used as a way to refute the theory of evolution, and that Earth is millions of years old. Ken Ham, Andrew Snelling, and other people behind the Creation Museum will also point to it as being proof that the majority of dinosaurs, if not all of them, died in a worldwide flood — Noah’s Flood, of Genesis –rather than millions of years ago, during the Late Jurassic, as most scientists claim.