Ebola Outbreak Warns WHO and Possible Cure on Horizon 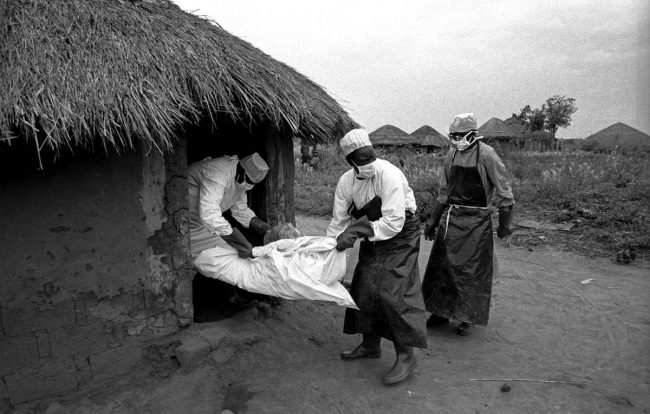 Ebola just claimed five lives in Sierra Leone, according to the the World Health Organization (WHO), which confirms that there is no known cure. Despite this, WHO remains hopeful for a possible cure on the horizon. WHO warns travelers to not leave the infected areas, nor to travel to them and these warnings are intended to serve as protective measures to prevent a pandemic outbreak. The recent deaths are a wake-up call that viral infections know no borders, which makes this not just an African problem, but a world-wide health problem.

Sierra Leone borders with Guinea and there are reports that Ebola has taken 100 lives since March, says WHO. As a result of this viral outbreak, the World Health Organization has deployed six experts carrying essential supplies to this infected area. This deadly virus has stealthily moved through Uganda, South Sudan, Central Africa, including the Democratic Republic of Congo and Gabon. The Ministry of Health, Guinea, reported on May 12, 2014 that there were a cumulative 248 clinical cases of the filovirus total, and 171 of those cases resulted in death. Surviving the viral infection is not likely, but some do.

Ebola first appears as a deadly flu-like illness with fever, muscle pain, weakness, skin rash and headaches. It then progresses to vomiting and diarrhea. In the latter stages there will be internal bleeding, as well as hemorrhaging from the eyes, ears, nose, mouth and rectum. The deadliest of the five strains is Zaire and is known to be fatal in 90 percent of all cases. Ebola transmission is through human to human contact and requires bodily fluids, such as infected blood, saliva, sneeze emissions, sexual contact, or contaminated needles. Animals can also carry the disease and rabies is known to be within the same viral family.Currently there is no known vaccine.

The World Health Organization’s concern is that this is one of the most difficult contagions to catch. Ebola’s family of viruses is know as filoviridae. It has the ability to quickly duplicate and overwhelm the immune system. Initial infection to full incubation varies from two to 21 days. That is what makes it so difficult when it comes to air travel, because someone can be in process of unknowingly incubating and spreading the disease while traveling the entire globe. Although a possible cure is on the horizon, this Ebola outbreak comes with warning from the World Health Organization.

More research needs to be done in the area of infectious viral disease, but there needs to be more financial input from the private sector. Recently a survey from the Kaiser Family Foundation reported that 61 percent of Americans felt that too much money was being spent on foreign aid, failing to recognize that foreign aid is a means of self-protection for all, here and abroad. The pharmaceutical companies have commented that they do not have much incentive to invest in researching for these viral solutions, as it seems there is little profit in it for them.

The United Nations Children’s Fund spokesperson, Timothy LaRose, said that the key lies in educating the communities about Ebola. UNICEF agrees that it is important to get the correct information into the communities by distributing brochures that explain how the disease transfers and spreads and how it does not. They have done radio bits, as well as visited churches, schools, and have even gone door to door to hand out chlorine and soap to help protect the people from further transmission of the virus.

On the up-side, professor of pharmaceutics at the University of Texas, Maria Croyle, is sitting on the edge of a research advancement that looks promising in the fight against Ebola. Croyle and her lab team have developed a proven one-dose vaccine that has been effective in primates. Since 2007, she has been partnering with Heinz Feldmann and Gary Kobinger, Canadian researchers, in developing a quick acting non-injectable vaccine. The treatment consists of antibodies and virus-fighting proteins. Recognizing that Ebola outbreaks in Africa would be in regions without clean facilities to support safe injections, this team has created an oral administration via the nasal passage. This allows for portability when moving from village to village. The next challenge will be to obtain more funding so that they can figure out how to produce mass quantities of the Ebola vaccine. Croyle says they are only a step away, as this will be an effective weapon against the deadly virus.

Another viable option for hope may be in Africa’s own back door. Traditional African medicine may have a plant extract that has a compound that snuffs out Ebola’s causative agent. This was recently unveiled in St. Louis, MO,  at the 16th International Botanic Congress, by Maurice Iwu, executive director. Garcinia kola is a tree that is familiar to central Africa, and its seeds are used as medicine throughout the region. The United States uses these extracts in supplemental form, and are recognized as safe by the U.S. Dietary Supplement and Health Education Act. Extracts from the Garcinia kola seeds have already been tested against a number of viral diseases and the active compound that has been effective against viruses is known as biflavonoid. Iwu says the window is wide for developing a drug from this compound with low toxicity. Iwu is focusing the research on the nature of the Ebola through pharmacokinetic testing and will be moving trials forward on mouse models. John Huggins who conducted the in-vitro tests with the U.S. Army Medical research Institute of Infectious Diseases has acknowledged that the biggest barrier will be financial. This is now considered to be a candidate drug, but pharmaceuticals will not touch it because it is not a big profit item, which means funding is needed from private charitable foundations.

Ebola does have the potential to become  pandemic; however, if travelers will respectively not leave infected areas nor go to them, doing that in the fight against the disease will go a long way. In the meantime, researchers will continue to seek out answers to combat this deadly virus. So yes, there is a possible cure on the horizon, but WHO remains concerned and have issued their warning for caution regarding this outbreak of Ebola.