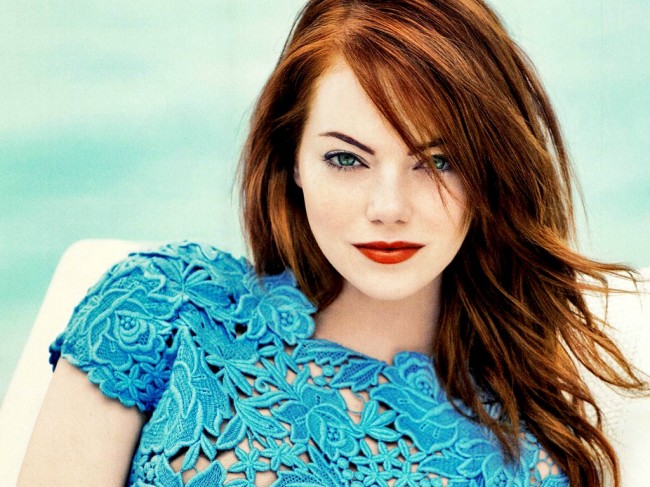 Emma Stone has been on the big screen since the sweet age of 15. Now a sexy young woman, she has managed to keep her career healthy and growing, while trying to keep her love life off of the big screen. Speculations as to the relationship between Stone and The Amazing Spider-man 2 co-star Andrew Garfield are all over the media. She has not confirmed the relationship, and her coy responses to questioning have fans even more intrigued. She appears to truly be a master of ‘the tease’.

Stone began acting in theater in Phoenix, Arizona near her hometown. She made a PowerPoint to convince her parents to let her drop out of school and pursue acting. They agreed and she moved to Los Angeles with her mom to start auditioning. She had various roles, including Laurie Partridge in In Search of the Partridge Family, before landing her movie debut in 2007 in Superbad. In 2010, a role that was perfect for her came along. Emma Stone played Olive in Easy A, a sweet high school girl turned sexy in pursuit of higher grades and some extra income. This is not to say that Stone herself played sexy to get money or fame, but that the character was a mix of both traits, as is Stone.

The roles that she plays vary between titillating and ‘girl next door’ charming. Her performance in Gangster Squad in 2013 showed the sensual side of the actress. With flapper-style charm, sizzling outfits and even a few sex scenes, Stone definitely played a grown -role in this film. On the other side of the spectrum in that same year, she played in the comedy Movie 43 and was the voice of Eep in the hit family animation, The Croods.

The Amazing Spider-Man 2, which is now in theaters, features Stone. The interest in her relationship with Andrew Garfield seems to get as much press as the film. Stone let it slip on Good Morning America that she “…loves him very much.” The two have been referenced as a couple in the media since 2011, when they first began working on set together.

Regarding the film, Stone said in an interview in the UK that she very much enjoyed the role and felt honored to play Gwen Stacy. She added that she liked the character’s independence and ability to pursue her dreams alongside her romance with Spiderman. In the same interview, she also stated that like Jamie Foxx, she would want to be stuck in a web “with Jesus and Lil Wayne, too I guess, he stole my answer.” She sweetly laughed and poked fun at herself when questioned about her Spice Girls girl crush, flashing her sexy, yet quirky Emma Stone smile and saying “only three more to go.” She has previously spoken to two of the Spice Girls, Mel B. and Mel C.

The Amazing Spider-Man 2 is not the only film this year that will feature Stone in it. She is also in Birdman, a story about an iconic superhero that gets washed up and joins a Broadway play. The film will be released  in October of this year. She will also be starring in the Woody Allen film, Magic in the Moonlight, which is coming in July 2014. Stone is also in the untitled Cameron Crowe project that is set to release in December of this year. She has also made guest appearances on many shows, including The Tonight Show, where she beat out Jimmy Fallon in a hilarious and intense lip-syncing contest.

Sweet, silent, sexy and appearing to be humble, Emma Stone seems to have things pulled together for being 25 and in the limelight. Keeping mostly quiet about her love life and focusing on her career, this once PowerPoint-using Hollywood dreamer looks like she will have a long and promising career. Her classy style, mixed with her funny and down-to-earth attitude have earned her the attention not only of Andrew Garfield, but of many other men and women across the world as well.