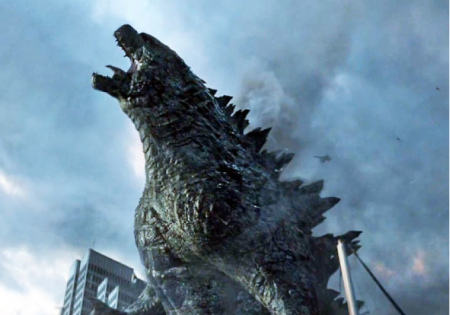 The 2014 Godzilla remake has smashed box office records for the year proving it is good to be king, as declared by a grateful public at the end of the film Godzilla is the “king of monsters.” Initial reports on ticket sales, which equates to bums on seats, has sages predicting an over $90 million return forecast by the time the dust settles on Monday. Of course with an opening day of $38.5 million that monstrous opening weekend return should come as no surprise.

Variety has gone on record with an estimate of $98 million for the Godzilla film opening weekend figure. They also go on to point out that the Bryan Cranston (Breaking Bad), Aaron Taylor-Johnson (Kick-Ass) and Elisabeth Olsen (Oldboy) movie is currently number one in the United Kingdom; where the film opened a day earlier than in the U.S.

This version of the “king of monsters” is faring much better than the lackluster 1998 Godzilla, starring Matthew Broderick. The film only pulled in $6 million over its reported $130 million budget on its opening weekend, although it did go on to gross over $379 million worldwide. Overall, this earlier production suffered from being almost universally panned by critics and it joined the ranks of two other Godzilla films that flopped at the box office, Godzilla 1985 and Godzilla 2000.

Without looking at past performances of previous Godzilla films and their relative earnings from ticket sales, focussing on the 2014 offerings shows that being the king of monsters is a good thing in terms of box office return. With the Friday open of $38 million Godzilla stomping the previous record holder for this year of $36.9 million set by the highly touted, and anticipated, Captain America: The Winter Soldierkk this mighty monster strolled past the Marvel hero’s box office return.

Another highly anticipated film, The Amazing Spider-Man 2 also fell short of the Japanese monster’s Friday opening with its open of $35.2 million. Looking at the figures projected for this weekend, Godzilla will definitely beat the current “monster” record holder, The Lost World: Jurassic Park which opened in 1997 with ticket sales of $72 million.

Looking at another, more recent, “monster movie,” the 2005 King Kong – giant ape versus giant lizard – shows that the opening weekend for that opus was on $50 million. Interestingly enough, the reception for the big furry, and lovelorn, ape was very positive. Whereas the reception for the large lizard has been sharply divided.

Thus far, those who have been in favor of this latest iteration of the 1954 classic have all been wildly enthusiastic about the film. Those who are not so enamored with the movie have been very vocal with their displeasure. Quite a number have complained about the “mothra” villain chosen to fight the monstrous hero.

Still, with little competition at the box office this weekend, Godzilla 2014 will continue to pull in the top viewing figures for this year. With the number two film’s earnings in ticket sales expected to be in the region of $26 million – the Seth Rogen and Zac Efron comedy Neighbors – it’s clear that not only is Godzilla the “king of monsters,” but it is good to be king…of the box office as well.