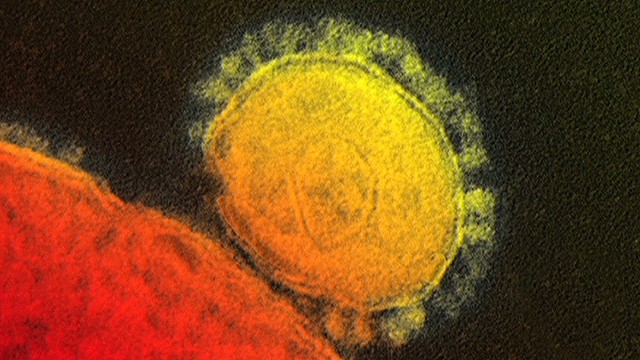 The MERS virus was found for the first time ever in the United States, diagnosed in a health care employee from Indiana who had recently been on an overseas trip to Saudi Arabia.Though the MERS (Middle East respiratory syndrome) virus doesn’t spread easily from person to person, this mysterious and often deadly disease has resulted in the deaths of over 100 people in the Middle East.

The condition of the health care worker who the MERS-CoV virus (a strain of the MERS virus) was discovered in is reportedly stable, according to Dr. Anne Schuchat, director of respiratory diseases at the CDC. She added that the man “represents a very low risk to the general public.” The man is a patient at the Community Hospital in Munster, Indiana. He is receiving oxygen and is in isolation. There is no known cure or vaccine for the MERS virus, though there is some hope that the man’s own immune system might slowly be able to fight against the disease.

A team from the CDC is headed to Indiana to offer their assistance and also in an attempt to retrace the man’s contacts, in an effort to pinpoint where and when he contracted the MERS virus. After leaving Riyadh, Saudi Arabia, the health care employee flew to Chicago, with a brief stopover in London. From Chicago, he then took a bus to Indiana. He began feeling ill on April 27, and was admitted to the hospital the following day.

Though the MERS virus, with an incubation period of around 5 days, is not easily communicable from one person to another, the CDC will also contact everyone who sat near the man on the airplane. Contacting people who rode with him on the bus will be more difficult, as bus companies generally don’t have records of who purchased tickets or where they sat on a bus.

MERS, like SARS (severe acute respiratory syndrome), is a coronavirus. The two viruses are similar, though MERS is newer, and it’s believed that it might be transmitted through eating raw camel meat or drinking camel milk. SARS outbreaks in China in both 2002 and 2003 resulted in the deaths of hundreds of people.

Since MERS emerged in Saudi Arabia in 2012, the World Health Organization (W.H.O.) has had approximately 400 cases reported to them, with fatalities in over a hundred of the cases so far. Some researchers believe that bats might have originally spread the disease. They possibly transmitted them to camels through their bites, as the MERS virus has also been discovered in a large amount of the camel population in Saudi Arabia.

Though getting MERS from contact with someone who has it is relatively rare, the disease has been known to spread in families, with other family members sometimes will also contracting MERS. Also, there have been some cases of patients with MERS who have infected nurses, doctors, and paramedics with the virus.

The W.H.O. urges hospitals to test any patient who comes there with symptoms that are typical of MERS, like shortness of breath and fever, and who have returned from the Middle East within two weeks prior, for the MERS virus. There are sometimes other symptoms of the disease, as well, that might be atypical.

In March, possibly because camels often give birth between November and March, there was an increase in the numbers of MERS virus cases reported in the United Arab Emirates, Oman, Kuwait, Tunisia, Qatar, Abu Dhabi, Jordan, and Saudi Arabia, and also the first example of someone in Egypt was identified. Younger camels are more susceptible to becoming infected with the MERS virus than older ones.

If you plan to travel to the Middle East, the CDC recommends that you stay as clear of farm animals there, in particular, camels, as much as possible. Also, it’s recommended that health care personnel in hospitals with suspected cases of MERS should don face shields, gloves, masks, and gowns when treating patients who might be infected with the disease. These measures are meant to lower the risks of coming into contact with bodily fluids and respiratory droplets.

Both the Indiana State Department of Heath and the CDC are jointly investigating the MERS-CoV case, which marks the first case of anyone in the United States becoming infected with the disease. That case brings the overall worldwide cases of MERS to 401. The MERS virus has so far spread to 12 different countries. Anyone who went to the Emergency Department of the Indiana hospital on April 28 between the hours of 6:30 p.m-9:30 p.m. and has since developed fever and respiratory problems should contact his/her health care provider and get tested for having the MERS virus.