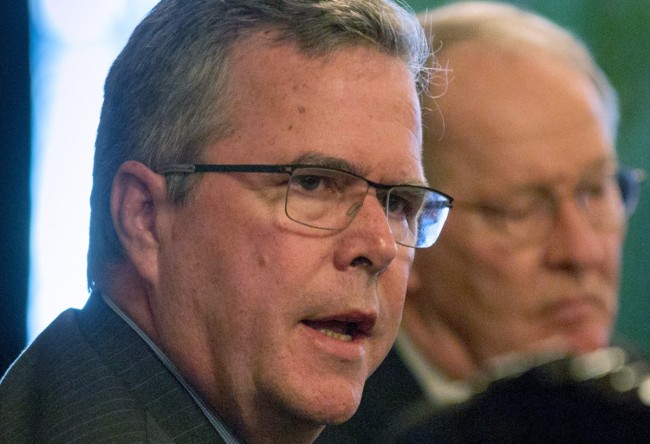 The 2016 Presidential Race is on. Or at least that is what the media wants to use to sell newspapers as evidenced by its rabid discussion of Jeb Bush’s possible run for the White House. It is still too early for people to really decide the merits of candidates whether they be Republican or Democrat, but shifts in the attitudes of donors lead to speculation that is as premature as it is entertaining. That is where Jeb Bush comes into play. As he creates more and more rumors about his political future, wealthy Republican donors who have bankrolled campaigns for years are taking notice. New Jersey governor Chris Christie has been their favorite recently and he has enjoyed widespread popularity among Republicans who want a straight talking, no games playing, trust-engaging politician to vote for. Christie, however, has proven himself to be the opposite of that image, which is where the younger Bush comes in. Right now, Jeb Bush is looking like the solution to the Chris Christie situation, at least as far as donors are concerned.

Chris Christie has been the darling of Republican donors for quite some time. Perhaps it was his well-known bluntness that attracted them. If a man is direct, then maybe he is more trustworthy than others. Or perhaps it was his ability to be a Republican governor in a blue state like New Jersey. He has broad bipartisan support, which is basically political sex appeal. As head of the Republican Governors Association, Chris Christie has managed to help the organization break its fundraising records. His management skills are obviously good when it comes to raking in the monetary support. Put all these things together in the not-overly-small package of Chris Christie and Republican donors see a candidate who is likable, direct, and popular, making him an obvious draw for their money.

But Christie made a mistake with the Bridgegate scandal. His staff and administration is so embroiled in the issue that his national reputation is on the decline. Now all that likability has evaporated as people begin to consider him just another crooked politician. The bipartisan support has turned into bipartisan disgust over Bridgegate and his directness is starting to look like bullying. Whether or not Christie himself gets fully implicated in the scandal, the stink of corruption has lingered around him so strongly that it has created a problem for his presidential ambitions and he has had to draw back on speculation for a run at the White House, saying instead that he just wants to concentrate on New Jersey and his work at the Republican Governors Association.

There are few Republican hopefuls as popular as Chris Christie and, in his absence, a crisis was created as to who would step in and take his place. That was Jeb Bush’s cue. At a Catholic Charities fundraiser, he said he was “thinking about it.” It is not the surest indication of a bid for president. Thinking, even when done by a politician, does not mean that he actually intends to launch a presidential campaign. Unlike some who are part of the 2016 speculation, though, he did say that he would decide after the midterm elections set to happen later this year. That is the most direct answer the media has had so far from any possible candidate on either side of the aisle and they immediately seized on it as a headliner.

For Republican donors, though, Jeb Bush likes the solution to the Chris Christie situation and a money saver. Instead of funnelling funds into the embattled New Jersey governor, they could be giving money to a guy with a clean record in politics and a well-known name. Many donors donated to George W. Bush when he ran and to George H. W. Bush back in the 1980s. There is a great amount of loyalty to the Bush family as a political institution. Jeb’s connection to that well-liked family could not hurt him if he started to actively campaign for donations.

Moreover, Bush has many of the characteristics that made Chris Christie popular and none of the scandalous drawbacks. Bush was governor of Florida, which is a state of diverse opinions. It is one of the biggest swing states for presidential elections. If Jeb could play on his popularity in Florida when he runs for the presidency, then he might have a good chance at winning the whole contest. Moreover, Jeb Bush has bipartisan likability. His stance on immigration is just one area in which his moderate views might stand him in good stead with more liberal voters. Recently, he called illegal immigration and “act of love,” pointing out that many of the undocumented immigrants crossing the border did so to be with their families instead of for hardcore criminal reasons. He may have caught some flack for that from his own party, but it may be the best way to appeal to Democratic voters.

Polls have also pointed to Jeb Bush’s ascendancy and Chris Christie’s decline. In Florida, the younger Bush brother is the most popular Republican candidate according to a poll from Quinnipiac University. Christie, who has topped the polls until recently, came in fourth behind Bush, Senator Rand Paul, and Senator Marco Rubio. The swing from Christie to Bush will no doubt be taken into account by donors who want to make the surest bet they can.

But is that enough? Choosing the best candidate to run for president is an instance in which Republicans will have to battle each other, but when it comes down to the actual race, whoever the candidate ends up being will have to fight against the Democratic opponent, whoever that may be. Right now, Hillary Clinton has a strong following. In the realm of faroff speculation, then, she is the yardstick by which all Republican hopefuls have to measure themselves. Jeb Bush is a relative newcomer, so how does he measure up to the former Secretary of State?

The answer is not exactly good. Among her own party, Clinton enjoys more popularity than Bush does. According to polls, she has 77 percent of Democrats supporting her as compared to Bush’s much smaller 40 percent. The Quinnipiac University poll has her leading Bush by a margin of 49 to 41 percent in Florida, the state where he was governor. Bush is her closest competitor in that poll, a position that does not bode well for the latest Bush scion.

So what does all this mean? For Republican voters, it means that they have yet another name to add to the mix of potential candidates. Thus far, they have a lot of options and it is all a crapshoot as to which one will actually come out on top. For Republican donors, it means that Jeb Bush is starting to look like the best investment for their money after Chris Christie ruined his chances so spectacularly. As good businessmen, however, they will no doubt take their time in making up their minds. For the media, his “will he or won’t he” story looks like a way to make headlines. Jeb Bush may be the solution to the Chris Christie problem, but that means very little. Republicans need a fix to the Hillary Clinton problem, too, and the jury is out on whether this particular Bush family member is the solution they need in 2016.

One Response to "Jeb Bush Is Chris Christie Solution"