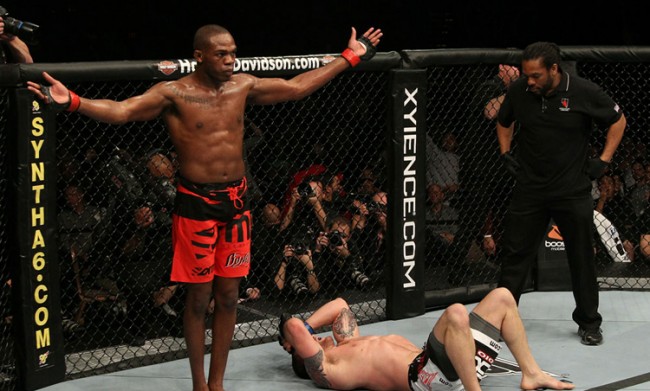 Razor Ramon recently said at his WWE Hall of Fame induction acceptance speech that “bad times don’t last, but bad guys do.” Ramon’s phrase could very well apply to one of the MMA world’s most polarizing figures, reigning UFC light heavyweight champion Jon “Bones” Jones. Despite previously expressing reluctance to embrace the role of a proverbial heel (bad guy) among fans, it looks like the 26-year-old champion is doing just that. Jon Jones appears to know a great deal of fans don’t care for him, and he is embracing the role of MMA’s bad guy.

In his early years, Jones presented himself as a virtuous, upstanding young man. In a 2009 interview with Sherdog, Jones even went so far as saying he would “snitch” on other kids who smoked marijuana, saying: “I’ve always been a person who tries to do the right thing in life, for the most part. I’m no angel, but I was always the kid who snitched on the kids who had pot. I don’t want to offend the pot smokers out there, but I was kind of just a snitch. I was just down for people doing the right thing. My parents kind of raised me to be a good guy. I’ve always been down for the good side, I guess.” Hours before he won the UFC light heavyweight title at UFC 128, Jones also got some press for pursuing and stopping a robber.

Later on the night of Mar. 19, 2011, Jones stopped Mauricio “Shogun” Rua in the third round to become the UFC’s youngest champion in history at the age of 23. From then on, Jones had some bumps in the road. In May 2012, he was arrested and charged with driving under the influence after he crashed his new Bentley into a pole.

Jones also gained notoriety in August 2012. Under the guidance of his coach Greg Jackson, Jones opted not to fight against Chael Sonnen as a replacement for Dan Henderson, his originally scheduled opponent. Henderson was forced to withdraw from the fight at the last minute due to an injury, and Jones refused to fight Sonnen as a new opponent with less than two weeks’ notice.

UFC President Dana White then announced that the UFC 151 pay-per-view event was cancelled as a result of Jones’ refusal, in what became a prolific public spat between fight promoter and fighter. Now, while Jones did have his fair share of defenders regarding not accepting the fight, he had just as many detractors from both fans and fighters alike.

These incidents were a stark contrast to the words Jones expressed earlier. In April 2012, when he talked about getting a UFC apparel sponsorship, Jones stated: “I’m glad the UFC wanted to work with me, as well. I think they trust that I will never make them look bad. You never have to worry about me getting a DWI or doing something crazy. I think I’m a good company guy. The UFC asks me to do anything and I always do it. I never tell them ‘no.’ I think I’ve had to do more marketing than any other fighter because I say no to absolutely nothing. I don’t think most champs are like that.”

However, it seems that after last month’s UFC 172 event, something has slightly changed within Jones. In the main event of UFC’s first fight card in Baltimore, Maryland, Jones soundly dominated and picked apart No. 2 ranked light heavyweight contender Glover Teixeira. Despite the fact that Teixeira is well known for his punching power and boxing game, Jones spent a good portion of the fight close and in range of Teixeira. In short, he beat Teixeira at his own game for almost five rounds.

Jones appears as if he is now acknowledging the criticism and the heat he is receiving from fans more often, and basically embracing the role of being the “bad guy,” as fans see him. Despite this, the fans in attendance at UFC 172 were actually not so hostile to Jones, considering his older brother, Arthur Jones, played for the Baltimore Ravens. Arthur helped the team win their second Super Bowl championship at Super Bowl XLVII in 2013.

Another example for Jones: his response to Chuck Liddell. Before the fight, Liddell, a friend and mentor to Jones’ opponent Teixeira, had no problem criticizing Jones. Liddell, a UFC Hall of Famer and former UFC champion, was one of the most beloved and popular MMA fighters of his era. He helped carry UFC and MMA out of the dark ages and put them on the road to prosperity.

As a champion, Jones is younger and has surpassed Chuck Liddell’s record, as well as the previous light heavyweight title defense record of former champion Tito Ortiz, a longtime rival of Liddell. Liddell spoke on a prospective match-up of himself in a prime against Jones, “I think I would have been a horrible matchup for him. I would have walked through his punches and he wouldn’t have caught me with anything.” Jones responded after the Teixeira fight on his Instagram account with a picture of Liddell and a caption that read, “Talking all that trash before the fight. You mad bro?”

Jones’ gloating tour did not end there. Before UFC 172, then No. 4 ranked UFC light heavyweight Phil Davis started verbally attacking Jones in interviews and conference calls. Later on that night, Davis was soundly dominated and defeated by Anthony Johnson. Jones after the fight event posted a mocking video clip of himself watching Johnson beat up Davis during the fight at home on TV. Jones posted the video with the comment, “Crumble me like a cookie?”

Later, Jones posted yet another mocking video. This one was directed at the fans who criticized him for being a dirty fighter for his eye poke fouls on Glover Teixeira during their title bout. Jones noticeably eye poked Teixeira twice during the fight. He was sternly warned by referee Dan Miragliotta after the second offense. Jones imitated fans and mocked them with a short video clip, which he also posted on his Instagram account. However, he later deleted the video, but it was recovered and posted on YouTube (seen below).

While some might construe these displays by Jones as cocky or arrogant, what he does appear to be doing now is playing off complaints and criticisms he receives from both fans and also his own peers. Playing the bad guy is not a detrimental role for Jones at the moment. Boxer Floyd Mayweather famously became a much bigger draw when he adopted the persona of “Money Mayweather” and embraced being seen by some fans as a trash-talking bad guy.

His next match-up is scheduled to be a highly anticipated rematch against No. 1 ranked UFC light heavyweight Alexander Gustafsson in a rematch from UFC 165. In their first fight, Jones won a closely fought unanimous decision, but many saw the bout as Jones’ toughest challenge to date. Gustafsson made Jones look vulnerable for the first time in the young champion’s career, and for this go-around, many fans will want to see Gustafsson defeat Jones even more.

This could be a genius ploy on Jones’ part to increase interest and money earned for this fight. While fans are hoping for Gustafsson to come out victorious here, no one can deny Jones’ credentials anymore. He’s defended his belt seven times. He defeated four UFC champions in consecutive fights, and he’s arguably the top pound-for-pound fighter in the world today. Once again, as Razor Ramon said, “Bad times don’t last, but bad guys do.” And with Jon Jones embracing the role of MMA’s own “bad guy,” so he will.