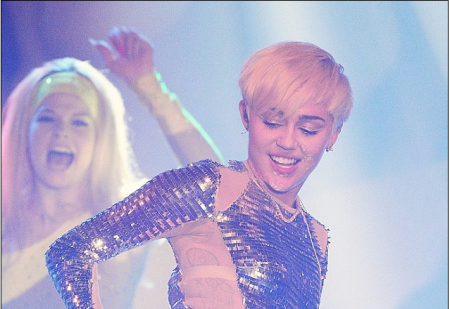 Miley Cyrus decided to court even more controversy on Friday at the London G-A-Y club when she made a tasteless date rape joke on stage. The 21 year-old singer loves to be outrageous for her fans but this time it may have alienated quite a number of those who don’t find the idea so funny. While performing at the club, Cyrus brought a friend up on the stage with her so she could wish him a happy birthday.

According to TMZ she joked about his sexuality saying that everyone was a little gay, it only takes “one drink,” Miley said. She continued with the line that if doesn’t work just sprinkle something in it. Cyrus finished by saying that she always does that. This latest bit of outrageous behaviour follows her earlier statement to fans where she stated that cigarette smoking was more dangerous than smoking marijuana so Miley urged folks to roll a “big fat blunt” and smoke it.

Making inappropriate jokes about putting things in someone’s drink was not all that the Wrecking Ball singer got up to at the club. Riding a giant inflatable penis was a large part of her performance. Straddling the large plastic genital replica, Cyrus went on to lick, mouth, caress, ride and fondle the thing. Several pictures have been printed in English newspapers and can be seen by following the links below. As this is a more family oriented publication, the photographs will not be shown here.

Miley Cyrus certainly acted true to form at the G-A-Y club in London and while her penile antics were on par with previous performances, her tasteless date rape joke on stage breached the boundaries of good taste. Still, with her introduction of another inflatable sex toy, where the equipment was not so large, but still apparent, the Bangerz performer gave her gay fans at the venue a sexually explicit show aiming to please.

At one point during her set, Cyrus exclaimed to the mostly homosexual audience that the singer’s gay fans were her favorites. Speaking to an English publication earlier the performer stated that she’d never seen more gay people than in London. Explaining that in the United Kingdom Miley felt that they seemed more open to revealing their true sexuality. Miley went on to say that she believed in gay marriage even though half of her home country was still against it. The We Can’t Stop performer has always said that the British capital was her favorite place to perform.

London was her first concert after recuperating for a month when she had an allergic reaction to the antibiotic Cephalexin which had been prescribed for a sinus infection. Cyrus reacted badly to the drug and wound up in hospital. She had to cancel quite a lot of her U.S. Bangerz tour but recovered quickly enough to continue her European portion of it.

The next venue for Cyrus will be at the First Direct Arena in Leeds on Saturday. Miley’s fans may not appreciate her tasteless date rape joke on the London stage at G-A-Y and it could well be that she has, at last, crossed a line with many. The former Disney TV star has gone overboard to sexualize herself to the extreme. The amount of attention that she paid the giant inflated penis in London actually looked like part of a sex show instead of a concert and this may well turn off even more fans. Certainly, she has already alienated a great many Hannah Montana fans. It will be interesting to see if the performer goes onto Twitter to apologise for her latest controversy.