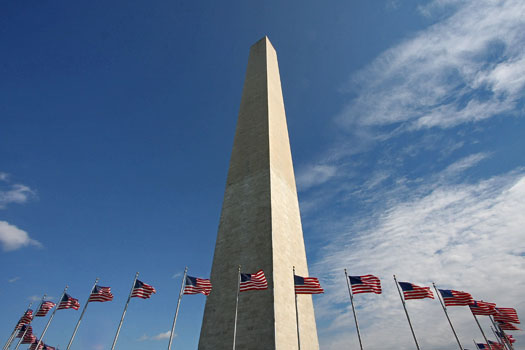 The Washington Monument, an iconic American image, reopens Monday after nearly three years. The 130-year-old obelisk was severely damaged in an August 2011 5.8 magnitude earthquake that shook and shocked the nation’s capital, and repaired thanks to a billionaire history buff who contributed half the money needed.

David Rubenstein, a billionaire businessman and philanthropist, personally put up $7.5 million of the $15 million needed to repair the damaged structure. Congress allocated the rest.

The 555-foot stone obelisk that honors George Washington sustained extensive damage inside and out.  More than 150 cracks in the white marble and mortar needed fixing and rain damage sustained since the shaker repaired.

Rubenstein has long revered George Washington, so the history buff wanted the Washington Monument repaired quickly. He funded half the project so the construction work could be completed. “I wanted people to get to see it as soon as possible,” he said, largely because it is one of the most recognizable American buildings.

A Carter Administration veteran and lawyer, Rubenstein co-founded The Carlyle Group, a Washington-based global asset management firm, in 1987.  As Carlyle co-CEO, Rubenstein is extremely busy with ensuring public access to objects from American History and rallying peers to get more involved.

Rubenstein wants others who have the means to engage in “patriotic philanthropy,” The Washington Monument repairs are not the only way he has put his money where his mouth is. He has acquired a staggering collection of historical materials, estimated at $50 million.  He may own the documents and such, but he prefers to make available to the public.

At the National Archives, where he made a sizeable financial gift too, there is a David M. Rubenstein Gallery. The exhibit there is about legal rights and features Rubenstein’s copy of the Magna Carta, one of only four copied believed to exist of the 1297 document. His copy of the Declaration of Independence hangs on a different floor.

Rubenstein has said, “I like to remind people about American history.” His other treasures on display in the capital include The Emancipation Proclamation, signed by Abraham Lincoln, and currently residing in the Oval Office, and the 13th Amendment, the one that abolished slavery, which is in the Smithsonian Museum. Rubenstein’s latest purchase, for $14.2 million, is the Bay Psalm Book, which is believed to have been the first book printed in the U.S., and he also plans to lend it out for display.

The Washington Monument used to draw about 700,000 visitors a year prior to the quake. Thanks to history buff Rubenstein, the Washington Monument has been repaired and is ready for visitors. In anticipation of a higher-than-usual demand, the National Park Service, which oversees the obelisk, said will keep the structure open for extended hours starting Tuesday and throughout this summer.

One Response to "Washington Monument Repaired Thanks to History Buff"