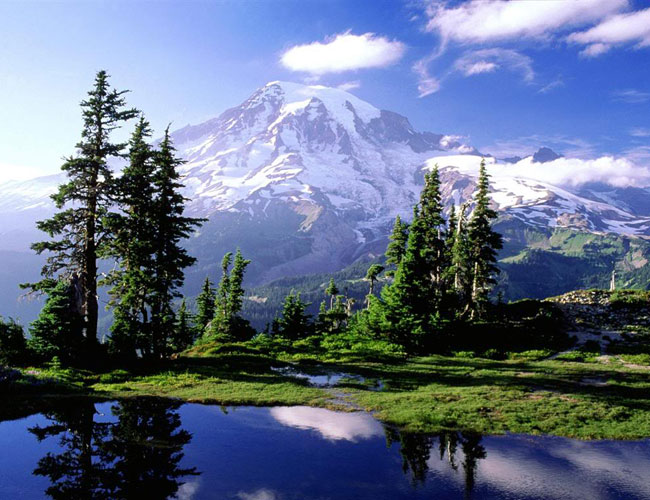 Six missing climbers on Washington’s Mount Rainier have “no chance of survival,” said Fawn Bauer, spokeswoman for the National Park Service. A debris field of tents, clothing, and other equipment was spotted by helicopter searchers over Carbon Glacier along the treacherous Liberty Ridge route. The mountaineering paraphernalia is littered down the steep, northern side of the mountain in a pattern suggesting an avalanche or rockslide.

Ms. Bauer said helicopters had flown low enough to detect avalanche beacons in the snow. “They [rescuers] feel there is no chance of survival at this point,” she said.

The group was last heard from Wednesday at 6:00 p.m. via satellite phone in the Liberty Ridge area of the mountain. It included guides from Alpine Ascents International, a mountain guide tour company. The group left Monday along the north face of the mountain for a five-day ascent. Identities remain unknown.

A prominent landmark of the Seattle skyline, Mount Rainier attracts thousands of climbers wanting to reach its 14,410 summit. Liberty Ridge is known as one of the most advanced routes on the mountain. Some say Mount Rainier is the best alpine climb in the lower 48 states.

A 1981 climbing party on Mount Rainier also had no chance of survival. The party of 29 was traversing Ingraham Glacier when an ice avalanche killed 11 of them. It was the single most deadly climbing incident in the United States.

Other dangers on Mount Rainier include falling rock, hidden crevasses, extreme exposure and steep slopes. The Liberty Ridge and Ingraham Glacier routes have seen the most deaths.

One to three people die on Mount Rainier each year. Since the beginning of record keeping in 1897, 34 people are known to have died in avalanches in Mount Rainier National Park. Today adds six more. In total, four hundred and five people have died there, including 12 suicides and at least one of natural causes. The majority, however, have been from climbing related causes, such as falls, hypothermia and avalanches.

One estimate is that a total of 185,000 people have reached the summit of Mount Rainier on foot. About 10,000 people make the summit attempt each year and approximately 50 percent succeed. Like today, several people die making the attempt.

Further information about the presumed-dead climbers on Mount Rainier was not available from Alpine Ascents International. The company’s website advertises “a unique approach to climbing Mount Rainier.”

There are more than 60 named routes on the mountain. All are “technical,” which mean possession of an ice axe – and skill in using it – is required. All of the routes require a helmet and crampons, plus much of the travel is done roped up because of danger of falling into invisible, snow-covered crevasses. It is the rare risk-taker who climbs solo. Climbers must be in top physical condition and have a strong desire to stand on the top of the mountain.

On December 10, 1946, 32 U.S. Marines – none of which were climbers on that day – also had no chance of survival when their Curtiss R5C Commando aircraft crashed into the Mount Rainier’s South Tahoma glacier at 10,500 feet. It was at the time worst aviation accident in U.S. history.