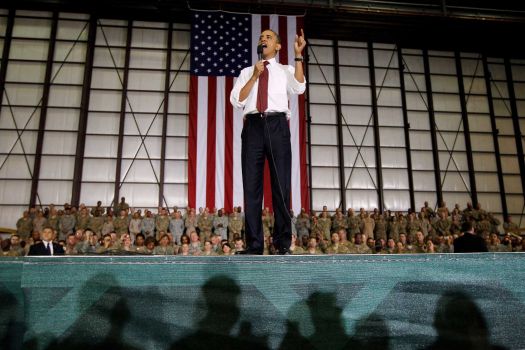 During this Memorial Day weekend, President Barack Obama made an unannounced trip to Afghanistan to visit the American troops who are stationed there. His trip to Afghanistan was for the sole purpose of applauding the soldiers for their efforts and the sacrifices that the military has made during their time in Afghanistan.

President Obama joined by Susan Rice the National Security Advisor, Dan Pfeiffer, Senior Advisor and John Podesta, Advisor, left the White House Saturday night. After a 13-hour flight in Air Force One, they arrived at the Bagram Air Field in the early hours of Sunday morning. Country Musician Brad Paisley accompanied Obama on this visit and surprised the 32,000 troops at the rally with an hour-long performance before the president took the stage. Obama thanked the soldiers for their services and expressed how proud he is of them. He also stated that when speaking with the leaders of corporations he advises them to hire veterans as they can “get the job done.”

During his visit in Afghanistan, Obama had plans to speak with James Cunningham, U.S. Ambassador and military commanders to receive updates of the current situation on the battlefield. He was also expected to visit the wounded soldiers at a hospital on the military base.

While speaking to the soldiers, the president addressed the withdrawal of American troops from Afghanistan this year. Although he had previously stated that there would be a complete withdrawal of U.S. troops from Afghanistan, this will no longer be the case. There is speculation that one-third of the troops may be expected to stay behind. He expressed his hopes of coming to a bilateral security agreement with Afghanistan’s new president. This agreement would result in a “limited military presence” in Afghanistan which would provide further training for the Afghan military in fighting against terrorism. Afghanistan’s presidential candidates are Abdullah Abdullah and Ashraf Ghani. Both Abdullah and Ghani have pledged to sign the agreement proposed by Obama and his officials for U.S. troops to remain in Afghanistan beyond this year. The elections are scheduled to take place on June 14.

Obama is expected to announce the post-war plans on May 28 at the U.S. Military Academy at West Point in New York. He and his national security officials will be considering information they received from speaking with military commanders in coming to a decision regarding the U.S.’s role in Afghanistan after the war has ended.

President Barack Obama has visited Afghanistan on several occasions during his time in office. His last visit was upon the finalization of the 10-Year Strategic Partnership Agreement which promised economic and developmental aid to Afghanistan as well as the plan for a security agreement for upcoming years. The war in Afghanistan has lasted for over a decade. According to the United Nations, over 14,000 Afghan civilians have died as a result of this war in the past six years alone. The United States has spent hundreds of billions of dollars in Afghanistan and has lost over 2,000 of its soldiers who were serving in the war.