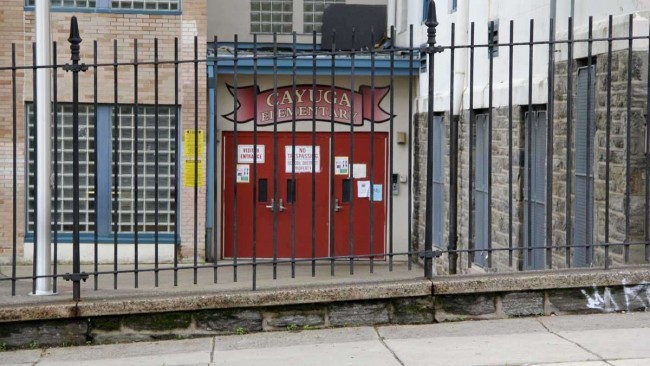 Four teachers and one principal at Cayuga Elementary School in Philadelphia have been busted for actively teaching their young students to be cheaters. Between the years of 2007 and 2012, these “educators” included “C” in the three “R’s” of reading, writing and arithmetic in an attempt to cheat on the school’s overall standardized test score performance. Better test scores meant promotions for staff and administration whereas inferior scores resulted in demotions and firings thus these substandard educators had a personal stake in making sure their students scored well. Not surprisingly, Cayuga students did not just score well, they scored remarkably well on their tests – that is until the school came under investigation in 2012 after which the scores plummeted drastically. These cheater teachers now have to face the repercussions of their serious lack of integrity.

Cayuga Principal Evelyn Cortez, 59, headed up her teacher “cheaters union” which included Lorraine Vicente, 41, Jennifer Hughes, 59, Rita Wyszynski, 65 and Ary Sloan, 56. All five of the pseudo-educators have been suspended by the Philadelphia School District but, as they have been busted but not yet convicted of any charges, they will continue to collect their salaries. All five women face charges related to forgery, conspiracy and tampering with public records based on the recommendations of a state Grand Jury. Philadelphia Attorney General Kathleen Kane expects more charges against the five and perhaps other individuals as well as the investigation widens its scope to include other schools. According to Kane, the “alleged” cheating misconduct by the five educators is an “affront to the public’s trust.”

Rather than be reprimanded for cheating as is the norm in most schools the “cheaters union” at Cayuga Elementary brazenly encouraged the students to cheat, in fact it was almost mandatory that they do so. Wrong answers were simply not acceptable until they had been changed to reflect the correct standardized test answers. Some parents had their suspicions that something was not quite right as their children were getting remarkably good test scores but were still struggling with their homework and basic skills. However, no parent would have assumed that their child was being taught by their teacher to cheat, and the students likely did not fully understand why the teachers were providing them with the correct answers to test questions.

The “cheaters union” used blatant tactics to manipulate test scores. Teachers were provided with previews of the standardized test booklets. In some cases, they had students write their answers on scratch paper first so that the teachers could check the answers and make corrections before they were entered in the official test booklets. In fact, Principle Cortez would provide instructions to the students to use the scratch paper over the school’s loudspeaker before testing sessions began. She also used the loudspeaker to remind teachers to cheat in that she instructed them to patrol the classrooms and help students who had questions about their answers. Further, it is alleged that Cortez changed incorrect answers herself after reviewing test booklets that had escaped the watchful eyes of her cheater minions. According to a 14-page presentment by the state Grand Jury, Cortez “systematically cheated” to improve test scores. Now that they have been busted, Cortez’s minions have turned on her and via their testimony, have exposed her tactics.

Attorneys for the cheating teachers in Philadelphia have no choice but to defend them. However, their statements that their “clients did nothing wrong” and that they will be vindicated are reprehensible if not ludicrous. Attorney Samuel C. Stretton who is representing Wyszynski claims she is a devoted teacher who is being used as a scapegoat for a system “obsessed with test scores.” He further states that these “good teachers” are being “thrown under the bus” by the school district.

The true victims of the teachers who taught students to cheat at Cayuga Elementary School are the students who have had their perceptions of learning and morality corrupted by people that they have been taught to respect and obey. Whether or not the testing standards are realistic or if they do indeed put too much emphasis on test scores, teaching students to cheat is not defensible under any circumstances. Perhaps standardized testing methods need to be reviewed. However, in the meantime the investigation of teachers that are cheating to improve test scores needs to widen in scope to include other schools and all five members of the “cheaters union” should have the proverbial book thrown at them.