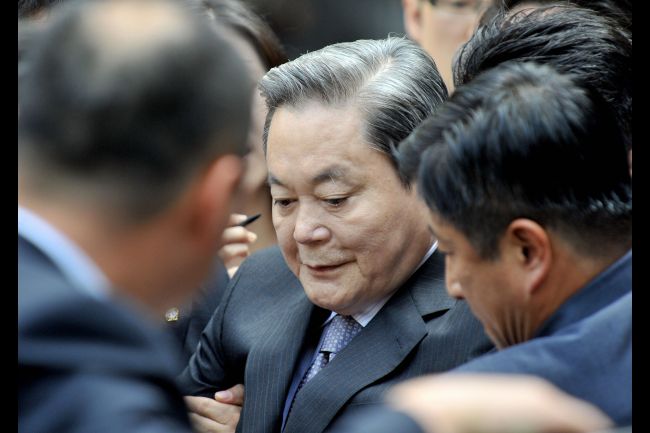 The Samsung Group’s esteemed chairman, Lee Kun-hee, has suffered a heart attack and is receiving treatment  in a Seoul Hospital. Currently, he is in stable condition, but questions are still being asked as to who will take over the large South Korean phone company.

The 72-year-old chairman was rushed to a local hospital near his home on Saturday night. While, at the hospital, Mr. Kun-hee began to show symptoms that are common in an episode of cardiac arrest. The hospital staff was forced to perform cardiopulmonary  resuscitation. So far there is no word on how long Mr. Lee will be in the hospital. The hospital and the Samsung company refused to give any statements on the matter.

Lee Kun-hee is the one who founded the Samsung Electronics Company, which extends to the Samsung Group. The company is a large conglomerate based in South Korea. They manufacture many household products such as washing machines, refrigerators, television sets and even semiconductors. They are best known for being one of the biggest cellular phone companies in the world. They are the company that brought the world the Samsung Galaxy S family phones. While he retains the final say in most strategic matters within the company, Mr. Kun-hee is not as involved in the operations of the Samsung Group.

This is not Mr. Kun-hee’s first bout with health problems. The Samsung chairman’s health was jeopardized in the late 1990s when he was suffering from lung cancer and last August he was hospitalized with pneumonia. Now in 2014 the Samsung Chairman has had a heart attack.

This latest health scare from Mr. Kun-hee raised the question of who would be the one to take over the Samsung Group in the case of his demise. Mr. Kun-hee’s 45-year-old son, Jay Y. Lee has been groomed to take his place at the top of the company. Lee junior currently holds the position of vice chairman at the Samsung company and is considered to be the face of Samsung. Jay Y. Lee is responsible for opening business relations with companies like Apple Incorporated and other big name companies, as well.

Lee’s father wrote in his biography back in 1971 that he chose his third son after his two eldest expressed disinterest in taking over for their father. The younger Lee is currently the third largest shareholder in the Samsung SDS Company with a stake of 11.3 percent. He also holds a 25.1 percent stake in Samsung Everland.

The Samsung company has been in the Lee family for the longest time, ever since Lee Kun-hee took over control of the company in 1987 after his father had passed. Before his death, the eldest Lee’s father founded the Samsung Group.

The company has experienced its first net loss last quarter after having a great three-year run. They are searching for new sources of growth so that they may reclaim their lost funds. They are considering expansion beyond Mobile phone and chips.

Despite the fact that the Samsung Chairman has had a heart attack, he is currently recovering in the Seoul hospital where he was checked in earlier.