Sun’s Sister Found but Can It Be Named Something More Exciting? 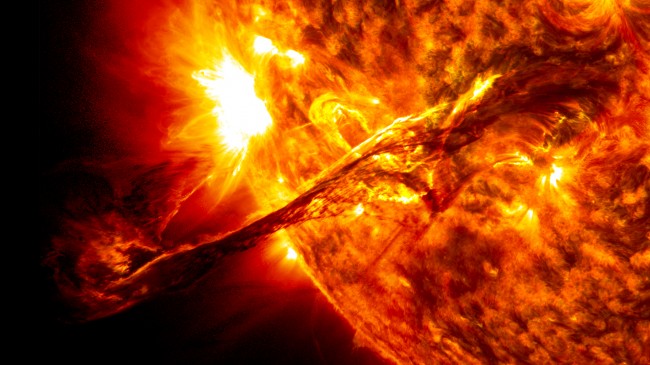 Humanity has always depended on its relationship to the sun. It has been worshipped since we were first capable of rational thought and mythologized in an attempt to understand our own existence. Its light has warmed us and allowed us to find food, make shelters, and build civilizations. Now, a group of researchers from the University of Texas has found our sun’s sister, a star born from the same solar nursery as our own. They named it HD 162826. Surely, a star with such a unique relationship to our own could be named something more exciting.

Our sun itself has been named by many different cultures. We have created whole lives of solar deities based on nothing but its pattern of rising and setting each day, its movements through the sky and around the moon. Ancient Egyptians called it Ra and worshipped it as a figure of creation. In Greece, its duties were divided between different deities: Alectrona of the morning, Apollo god of light, the sun, and healing, Hercules a solar hero, who journeys are the progress of the sun across the sky, and Helios, a Titan god of the sun. Persians called it Nahundi, a god of light and law, and Japanese made her female, Amaterasu, a goddess of the sun and the universe.

These days, the process of naming distant suns or galaxies is based on numbers that belie the reference points of that particular heavenly body. It has to be said that in general terms this is fair enough. It is the scientists who have the job of locating new stars and surely the easiest way to find them again is to use the name as a sort of compass point in the sky.

For all the non-scientist types there are several organisations that sell the rights to the naming of a star. However, the price paid gives the buyer no legal right over that star’s name as astronomers do not recognise the names in any official capacity. In addition, most companies allow the stars to be named by several different people. Still the novelty and romance of naming stars is enough to keep such companies in business.

Thus, the naming of stars is something that is perhaps of greater significance to the everyday Joe than to the scientific community. However, in the case of finding this particular star, the sister to our own, it would be nice if an exception was made to name the sun something more exciting than just a list of coordinates.

The solar sibling was found by a team of scientists who went actively looking for heavenly objects that might have the same make up as our own. They complied a list of 30 such stars using data based on high-resolution spectroscopy and information about orbit patterns and dynamics. HD 162826 is 110 light years away, which the head of the team of researchers, astronomer Ivan Ramirez, has reportedly called relatively close. Ramirez has also stated that it does not appear that there are any massive planets that correlate to our Jupiter, but it is possible that the region could support a planet with terrestrial life. Ramirez and his team are now hoping to build a solar family tree in an effort to understand the birth of our own sun.

The discovered sister star is said to be larger than our own and located in the constellation group, Hercules. The relation of Hercules to the sun myth is somehow fitting. Perhaps, it could be named something that might mean Hercules the elder, given its relative size and position. This would surely be a more exciting name and something fitting in regards to its incredible connection to our own source of life.