Supermassive Black Hole Could Be a Wormhole 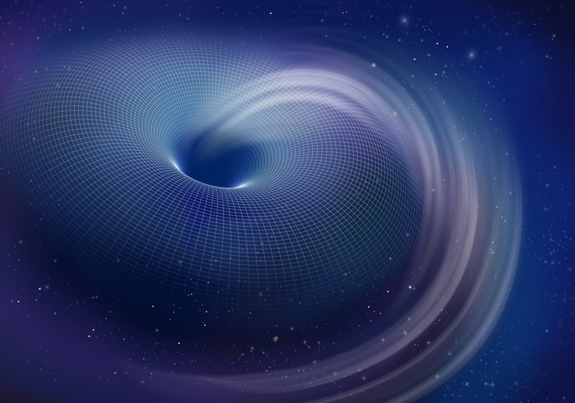 There is a region in the core of the Milky Way, called Sagittarius A* ( Sgr A*) from which radio waves of great power are generated. For some time now, astronomers have suspected that a black hole, with a mass four million times that of the Sun, was located there. Once they began tracking the orbits of stars that were close to the event horizon of the black hole, astronomers were finally able to confirm its presence. Not everyone, however, is convinced that a black hole is what they are looking at. Two researchers at Shanghai’s Fudan University, Zilong Li and Cosimo Bambi, have an intriguing theory. They believe that they have identified an emission signature that would be specific to a wormhole, but not a supermassive black hole. This signature may be able to be detected by an instrument that is so sophisticated, it is soon to be attached to a powerful telescope.

Logically, in order for black holes to grow to such massive proportions, it would take time, as they gobble up stars, interstellar gases and materials of the galactic variety. Explaining how the youngest galaxies host the earliest black holes, supermassive at that, requires information to which astronomers do not yet have access. Imagine some sort of mechanism that allows for very rapid growth.

In order to explain the observations of Sgr A*, as well as, the cores of other galaxies, Li and Bambi have a way to sidestep the whole growing so big and so quickly puzzlement, using an elemental effect from Einstein’s general theory of relativity. According to their report, various primordial wormholes could be possible candidates for explaining supermassive objects found in the cores of galaxies. Since the wormholes do not have solid surfaces, they are able to mimic a presence of an event horizon. Created at a time when the universe was young, then grown during an inflation, their presence is explainable, at high redshift, even.

The youngest observable galaxies are called high redshift. This is where, having traveled billions of light years, galactic light and frequencies are shifted to the part of the electromagnetic spectrum that is the most red. A black hole mimicking wormhole could have only formed during the Big Bang. Since the mass it exerted would have been millions of times greater than that of the Sun, this could explain why the oldest galaxies seem to all have supermassive black holes at their cores. It is possible, according to Li and Bambi’s theory, that they are instead humongous wormholes that can link disparate regions of time and space. The aforementioned instrument could be helpful in differentiating the emissions from the space plasma that surrounds the Sgr A* black hole or the hypothetical wormhole.

The Atacama Desert in Chile is home to the European Southern Observatory’s Very Large Telescope. Gravity is soon to be installed there. The instrument will be utilized to observe the center of the galaxy with never-before-seen precision. Li and Bambi would like the opportunity to analyze the data on emissions of plasma found in the vicinity of their theoretical wormhole in Sgr A*. Since the hypothetical wormhole would be smaller than the supermassive black hole, the signatures generated by the plasma would be quite different.

Li and Bambi created a model of hot plasma ensnared in the warped spacetime around a wormhole and a black hole. The researchers noted that the emission signatures were quite different. A black hole generates skewed and broad emissions resulting from both general and special relativistic effects. A wormhole’s emissions are a narrow line.

Rarely does such an unusual theory have such an immediate opportunity to be proved or disproved. Although the chances of the mass not being a supermassive black hole are as narrow as wormhole plasma emissions, it would be a true game changer if this theory turns out to be correct.

6 Responses to "Supermassive Black Hole Could Be a Wormhole"