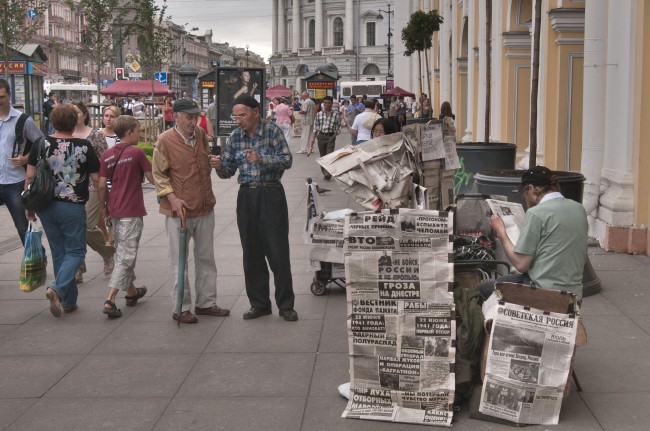 May 5, the first business day following last week’s tens of thousands of people marching through Red Square waving “Putin is Right” flags as part of Russia’s May Day celebrations, was a particularly interesting day for news stories concerning the Russian language. Three different news articles, all pertaining to the various repressions or manipulations of Russian, were reported on Monday. In one article, Vedomisti, one of the few independent Russian newspapers left, reported that Putin had quietly bestowed to 300 media workers an award for their “objective coverage of the events in Crimea.” Radio Free Europe/Radio Liberty published an article about a politically correct primer for children learning the alphabet. Lastly, yesterday Putin signed off on a new law that bans swearing in the artifacts and events pertaining to entertainment, the arts, and culture.

In the Vedomisti article, Putin spokesman Dmitry Peskov confirmed that the media awards were distributed though he added that the Kremlin was not planning to add any details about the matter, and the decree does not appear on the list of decisions published on the presidential website. According to Putin’s press service, this means that the document is not accessible to the public. Those who received the For Services to the Fatherland award are eligible for a generous monthly allowance and can apply for labor veteran status, which comes with many privileges and benefits. None of the 300 awards were given to workers from liberal media outlets. Critics of state-run media have persistently denounced what they have called an aggressive campaign of disinformation to smear pro-democracy protests in Ukraine and to justify Russia’s support of separatist rebels there. Since Putin’s re-election, it is known that state-controlled media has intensified its presence, especially in the medium of television.

In the May 5th edition of The Siberian Times, it was reported that the Russian language will be taught with political overtones. A pro-Kremlin youth group project called Network has created a new alphabet primer called the “Polite Alphabet.” According to the group, the name honors the polite forces deployed in Crimea. Here is a sampling of associations that Siberian children will make with some of the 33 letters of the Russian alphabet: A is for Anti-Maidan, Ukraine’s pro-Russian groups, complete with a graphic that shows a man lobbing a Molotov cocktail. B is for berkut, which is the golden eagle. The graphic for B is the emblem of the disbanded Ukranian riot police Berkut, whose Crimean unit was incorporated late March into the Russian Ministry of Internal Affairs. D is Donetsk, a Ukranian city. E is for unity. G stands for border. I is for history. P, of course, is for Putin, and R is for Russia. One of the Russian forms for the letter Y stands for Crimea. According to the group’s website, the Polite Alphabet will have been distributed to all city schools by the end of spring. “In the internet era,” says the group, “the ‘Polite Alphabet’ will help to correctly form the children’s minds.”

Yesterday, also, marked Putin’s signing off on a law that bans swearing in theatres, the media, television broadcasts, and films. It is current policy to remove swear words from films that are dubbed into the Russian language, but the new law extends the scope of that precedent. It bans swearing in concerts and stage performances. Books and audiovisual products that contain swear words must place warnings that state so much on their covers. Offenders risk either having their licenses withdrawn or fines of up to $1,400 for companies and $70 for individuals. It is unclear whether the swearing ban that applies to the media extends to Russian Twitter and Facebook users.

These three developments, all dealing with shaping the Russian language through restriction or association, were reported yesterday. A recent Rolling Stone article title put it best, claiming that Putin is clamping down and that “Russia is turning into a dark nation of fear, paranoia, and repression.”