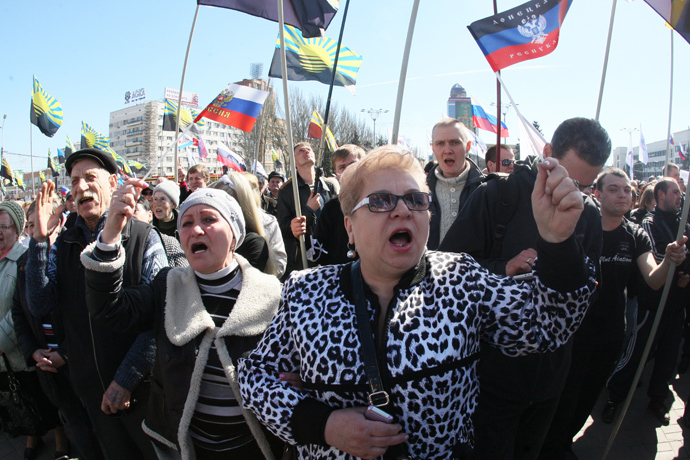 Separatists in eastern Ukraine have claimed victory in the organized referendum held yesterday, saying large majorities support independence from the country. Both Kiev and its international allies in the West have called the vote illegitimate.

The vote occurred amid violent clashes between pro-Russian separatists in the east and military from Kiev. At least 30 people have been killed in the confrontations, including one death during the referendum. The Ukrainian publication Ukrayinska Pravda reported that soldiers opened fire on a separatist crowd in Krasnoarmiysk, a part of Donetsk.

Soldiers were allegedly shown on YouTube shouting at the crowd to go home, while firing shots from the doorstep of a building. It has not been confirmed that the men in the video are Ukrainian soldiers. The Interior Ministry denied any such event.

Interim President Olexandr Turchynov has called the vote in the east a “farce” meant to destabilize the country before its highly consequential presidential election on May 25. Turchynov has blamed Russia for much of the unrest after the neighboring country annexed Ukraine’s Crimea region in March.

He said the vote was “inspired by Russia’s leaders to…destabilize Ukraine, undermine [its] presidential elections and overthrow [Ukrainian] authorities.”

Western allies to Ukraine have supported the acting government of Kiev after a popular uprising ousted president Viktor Yanukovych in February. Both the United States and European Union have applied economic sanctions on Russian companies and officials for their actions in Ukraine.

The sanctions look as if they will continue to rise as E.U. foreign ministers gather in Brussels today to discuss further penalties for companies that seized assets after the Crimean annexation. Additionally, French President Francois Hollande called for tougher moves if the upcoming presidential election is postponed.

Though Russian President Vladimir Putin denies any involvement in eastern Ukraine, authorities in Kiev believe Russian special forces are among the separatist ranks. While little concrete proof, Kiev still has reason to worry. The claimed victory from the referendum in the east has left Ukraine unstable.

A large force of 40,000 troops which Putin vowed to pull back earlier this month still remain stationed on Ukraine’s eastern border. U.S. Defense Secretary Chuck Hagel says there are no signs of the troop’s withdraw, during an interview yesterday. This along with Putin’s indirect contact with separatists has Kiev on edge.

After seeking out Russian support to no avail, the armed protesters organized a referendum for the region. Putin advised the groups to postpone the vote. They ignored this advice with no shock to Russia. Putin’s spokesman Dmitry Peskov said Russian leaders sympathized with the decision, considering the acts of violence against residents in the region.

The actual results of the referendum are difficult to determine as there were no international voting monitors overseeing the process. The claims seem overly optimistic considering a recent Pew Research poll, which found 70 percent of Ukraine’s eastern region support a united country.

Still Denis Pushilin, leader of the People’s Republic of Donetsk, is confident and referred to the region as a “sovereign state.” Some in Donetsk echo this while others do not. An unemployed man in the region, Peter Bobrovsky said he supported independence because he “[wants] to live in Russia” and added that “Ukraine can go west…without us.”

A differing opinion came from 27-year-old graduate student Ruslan Khalikov who agreed the vote was illegitimate. “Somebody printed…papers with some questions — so what?” he said. “I can [do] the same [thing] in my yard.”

The victory claimed by separatists in eastern Ukraine has been the latest in a long line of destabilizing events for the newly governed country. Ukrainian Prime Minister Arseniy Yatsenyuk called for reconciliation talks to take place May 14, but it is unclear if the separatist groups will appear.