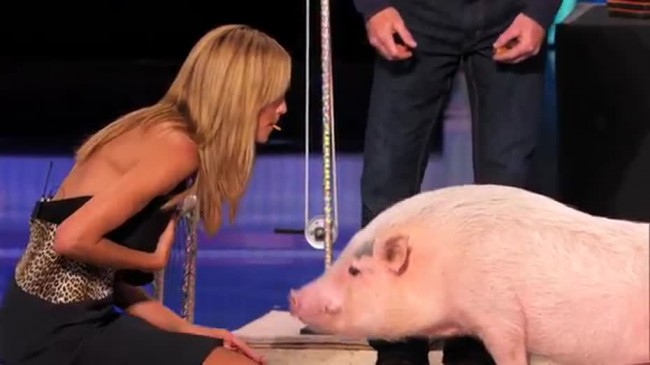 The comic brought the entire house down with laughter on her take on how men and women differ. Women are like dogs and men are like cats, even though everyone thinks it is the other way around. She begins by explaining that men are aloof and emotionally unavailable so, therefore,  just like a cat. She countered that statement saying how women are exactly like dogs, saying things like, “Where you going? Where you going? Where you going?” She repeats the statement quickly and viewers immediately picture a dog jumping around as the owner is about to leave the house. Immediately following that with, “Can I go? Can I go? Can I go?” Miller continues with, “I’m gonna wait right here. I’m gonna wait right here. I’m gonna wait right here.” In all of the excitement of Miller portraying a dogs behavior to that of a women, suddenly she goes silent, looks off to her left and says, “Shoes.” It was hilarious and the similarities between the sexes and the canine and feline world just continued. Miller made it into the next round with four thumbs up from the judges. A video of Miller’s funny monologue is at the end of this article for viewing enjoyment.

Other highlights of the show was when Nick Cannon showed his strength when he was asked to participate in a juggling act. The Kamikaze Fireflies had Cannon stand up straight in front of a grocery cart that had the female juggler balancing on top of it. The male juggler, while holding fire torches, proceeded to jump on Cannon’s back and climb up and around him to eventually stand on the host’s shoulders. Cannon had to stand there, holding up the juggler while the Fireflies juggled the torches back and forth. The judges sat on and noticed that Cannon was shaking during the entire act. No doubt it was not easy to carry someones weight like that, let alone be involved in a potentially dangerous act. Luckily, Cannon held his own and the act went on without a hitch.

The Hart Dance Team, compiled of two friends took the viewers by surprise when the duo started to dance and suddenly, more and more dancers kept appearing out of this box on the stage. It was very visual and entertaining and had the viewers mesmerized.

Though America’s Got Talent had answered an age-old question and explained how men are like cats and women are like dogs, Heidi Klum looked like she felt sorry for the other animals. Enter John Vincent and Mudslinger, the intelligent pig. Vincent’s act was showing the intelligence of his pig, Mudslinger and the act was pretty impressive. Mudslinger made a hole in one, weaved a soccer ball around some cones and scored a goal and even raised the American Flag. At the end of Mudslinger’s performance, Heidi Klum couldn’t resist but get on stage, get down on her knees and give the pig a kiss. Klum asked if pigs were like frogs before locking lips with the animal. Poor Heidi, no supermodel, pigs don’t turn into princes.