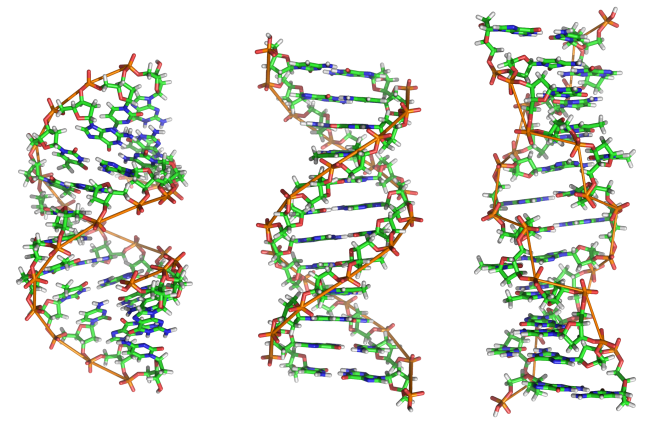 Research results out of Australia indicate that bacteria can warp their DNA to make them resistant to dehydration—a discovery that challenges the assumption that DNA’s biological usefulness is restricted to genetics. This structural functionality of DNA might help to explain why bacteria can continue to survive and reproduce in seemingly inhospitable environments. In addition, studying the advantages conferred by warped DNA also provides clues into the evolution of nucleic acids and their role in primordial organisms.

DNA is commonly referred to as acting as an organism’s “genetic blueprint.” In this mental picture, DNA is much like a hefty reference book at a library—other molecules such as proteins and RNA work together to “read” DNA, but the actual DNA molecule does not execute any actions on its own. At least, this is was what many scientists supposed until recently.

New findings reported by researchers from Monash University and the Australian Synchroton indicates that warping the structure of their DNA may help an organism to survive during times of dehydration or other harsh environmental conditions. The trick lies in how bacteria can twist their DNA back and forth between two main conformations: A-DNA and B-DNA. B-DNA was the specific conformation proposed by Watson and Crick in 1953, and is understood to be the DNA structure more commonly found in organisms. While A-DNA is still a double-helix, the helix is shorter and wider, thereby compacting the DNA.

To study how different levels of water availability influence the conformational changes in bacterial DNA, researchers subjected bacteria cultures to carefully controlled dehydrating and re-hydrating environments. They were then able to observe the resulting changes to the bacterial DNA using a completely non-invasive, reagent free method known as “Fourier transform infrared (FTIR) spectroscopy.”

The researchers observed that when the bacterial cultures were dried, their DNA conformations changed from B-DNA to A-DNA. Perhaps more excitingly, after re-hydration, the bacteria loosened their A-DNA back to a B-DNA form, indicating a distinct, reversible adaption to the environment.

In their paper published in the Journal of the Royal Society Interface, the research team described their findings as “evidence of a previously unexplored biological significance for A-DNA.” Given its limited presence in most cells, previous investigators have hypothesized that A-DNA must confer some evolutionary adaptations that go beyond the conveyance of genetic information. Past research has indicated that outside of a cell, A-DNA is resistant to damage from UV rays and radio sensitization. This evidence, combined with the current research findings, leads researchers to hypothesize that the B-A-B DNA transition is also involved in bacteria’s extreme resilience and longevity in otherwise inhospitable environmental conditions. They speculate that by warping its DNA, a bacterium might also gain some resistance to changes in temperature, toxic levels of oxygen, and even chemical exposure.

Furthermore, the discovery of a structural role for A-DNA hints at explanations as to how modern DNA evolved. Utilizing DNA to make proteins is a complex process that in itself requires proteins. This model of understanding leads to a chicken-or-the-egg question as to how organisms could have first begun replicating. Some researchers predict that prior to serving a genetic role, those nucleic acids (or perhaps a primordial analogue) must have served some structural purpose. This discovery that bacteria warp their DNA to survive dehydration and other environmental stressors, while not resolving the question, supports the idea that DNA may have at one point arisen out of structural necessity.