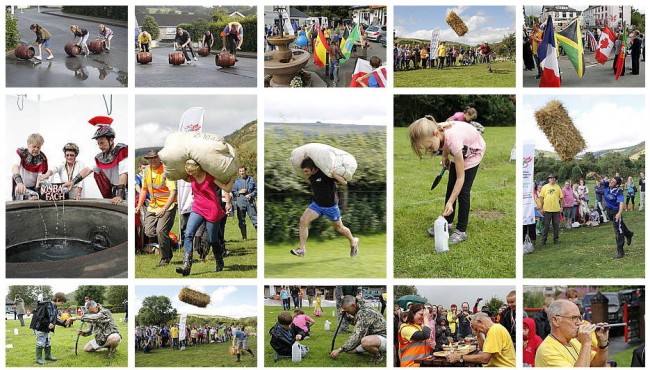 To keep itself going, the tiny British town of Llanwrtyd Wells in Wales offers quirky and original events, which cannot fail to attract visitors. The town, once famous in Victorian days for its restorative spas and pony-back treks, now offers events like the famous “World Bog Snorkeling Championships” and the ever-exciting annual “Horse vs. Man Marathon.”

Probably the smallest town in the U.K., the population of Llanwrtyd Wells would possibly just manage to fit in the average passenger plane. While in Victorian times the town thrived, just recently things got really quiet. The year 1980 saw the closing of the local natural-spring spas and soon after, the pony-back treks in the surrounding countryside lost their popularity, so the town had to do some serious thinking as to how to attract more tourism.

The owner of a local hotel, the Neuadd Arms, is one Gordon Green. Not only was he one of the first to notice that the town had a problem, but he was also the first to see a possible solution.

One evening in the hotel’s bar, Green overheard two locals having a lively debate as to whether a certain, measured distance would be the same for a man as it was for a horse. Listening to the quaint discussion, a figurative light bulb went on over Green’s head as he thought up the first original idea.

The “Horse vs. Man Marathon” was born at that moment, which is basically a race between humans and horses. Green thought this might attract visitors, particularly as the horse almost always is the winner.

Just last week the latest “Horse vs. Man Marathon” was run and it was reportedly the biggest yet, attracting 700 runners and 60 horses. The course for the horses was 24.8 miles and for their two-legged counterparts, 23.6 miles. And yes, a horse, named Leo, won the race crossing the finishing line at 2 hours 23 seconds.  You can watch the excitement right here:

Residents were asked if they minded that the horse nearly always wins and they say no, they accept it and they realize in most cases they don’t have a hope of beating their four-legged opponents. One human entry, 35-year-old John Cooney, offered that if they had a Shetland pony in the race, maybe he would have a chance.

That said, back in 2004 one Huw Lobb, a former Cambridge University cross-country runner, did win the race and apparently one other human has managed to do so since then, so there is hope.

But the tiny British town didn’t stop there, as it now offers even more quirky events to attract visitors and to keep things interesting. Because the “Horse vs. Man Marathon” became a popular event and attracted more visitors to the town, they came up with more unusual events, including the exciting “World Bog Snorkeling Championships,” which is run in the Waen Rhydd bog close to town.

Then there were the chariot races through the hillsides in full Roman gear, as well as “Stone Skimming Championships” and the always exciting “Wife-Carrying Races.”  They event imported some events from overseas, including Russian egg roulette, where everyone sees a bit of egg on their face.

However, sad to say some of the quirkier ideas failed, including the “Real Ale Wobble,” which entailed people riding mountain bikes through the countryside, chugging ale at the rest stop as an alternative to water. Too many riders fell from the saddle, it seems.

Whatever the event, it is the town that wins in the long run. Lindsay Ketteringham, who works in the bar at the Neuadd Arms Hotel, told the media that without these events, Llanwrtyd Wells would basically be “one huge white elephant.”

For your summer pleasure, coming up in August, Llanwrtyd Wells is hosting the World Alternative Games, a two-week festival which ”alternative” is definitely the best word to describe.

The games will include some great action like husband dragging, bog dredging, stiletto racing, scooter slalom and something familiar for U.S. readers – competitive rock-paper-scissors. The video below gives you an idea of the fun had in the British town back in 2012 during the World Alternative Games.

The kids can get involved too with many fun events including conker fights (for the uninitiated, this is a game in which children thread a horse chestnut seed on a piece of string and try to bash each others’ conkers) and, of course, the heart-stopping snail races.

As for your accommodation in the town, Llanwrtyd Wells offers a full range of comfortable and friendly bed & breakfast and cottage accommodation, along with a selection of hotels, pubs and restaurants. The town’s people couldn’t be more welcoming and the location is apparently great for exploring the rest of lovely green Wales. However, while the idea of the quirky events attracts visitors to this tiny British town, the beauty of the area offers more than enough to keep you there.