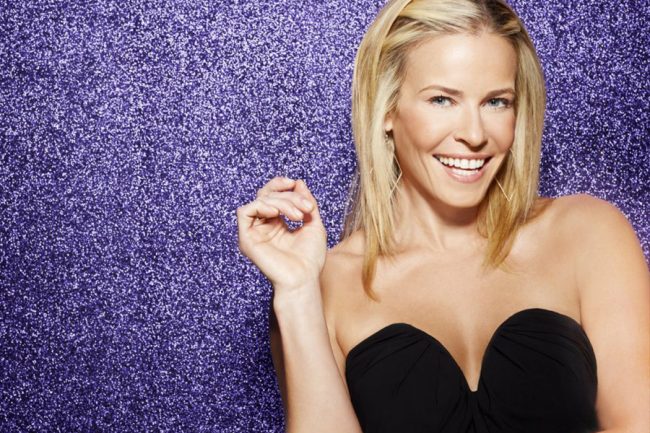 Talk show host Chelsea Handler, who recently announced plans to pull the plug on her long running late-night talk show on the E! Network, has just landed a very lucrative deal to bring her brand to Netflix. The Internet-streaming platform has reportedly struck a deal to provide Handler with a multi-tiered opportunity to produce another talk show, stand-up specials and four comic documentary-style programs.

While financial terms of the deal have not been disclosed, Handler has no doubt raked in big bucks for herself.  Handler made a reported $9 million per year during her run on Chelsea Lately on the E! Network, drawing in just over half a million viewers per night. Ratings of Chelsea Lately took a nose dive in the second quarter of 2014, which reaped poor revenue returns for the E! Network.  Chelsea Lately has been pulling in the lowest numbers during the vicious late-night talk show wars which saw The Tonight Show’s Jay Leno replaced by Jimmy Fallon, David Letterman announcing his pending retirement, and the abrupt cancellation of The Arsenio Hall Show. With Netflix’s built-in international subscriber base of approximately 48 million, Handler will no longer feel the pressure of having to score high ratings, but even with those high subscriber numbers, many question whether Handler, whose comedic style and content is considered to be polarizing by some, will be able to capture her own loyal share of the Netflix audience.

Answering the question as to whether a talk-show format will work on Netflix, the company’s vice president of content, Cindy Holland, says with such a large subscriber base, Netflix is committed to expanding its original programming slate to include all types of formats in order to give its audience the on-demand experience for which Netflix is known. Having Handler as part of their programming plans further positions Netflix as a true player in the television landscape.The streaming platform has been enjoying an upswing in credibility and has become a noted game changer within the entertainment industry.  With its ability to create quality, award-winning programming like House of Cards and Orange is the New Black, Netflix executives are very aware that they are venturing into new and unchartered waters with a streaming nightly talk show.

While Handler gets ready to shut down production on Chelsea Lately in August, the comedian is taking a course of action that has not been attempted by other comedians, namely taking her brand exclusively to the web. Handler saw the opportunity to move to Netflix as a fork-in-the-road moment and chose to bypass even premium cable outlet HBO, which has proven to be the home for virtually every other known comedian, including Wanda Sykes, Gary Shandling and Chris Rock, who in years prior, took their message and their brand from the restrictive traditional networks to the premium cable station.

Just as many radio personalities, like Howard Stern and Don Imus, have taken their messages and brands to the world of satellite radio and found their own levels of success, Handler is attempting to stake her claim in the streaming network platform of Netflix and hoping for similar success. The as-yet-untitled Chelsea Handler talk show is not set to launch until 2016.