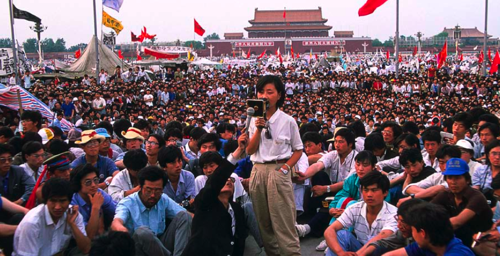 Military and paramilitary officers were sent to patrol the Tienanmen Square area. Cars were stopped. Reporters were not permitted in the area. Pedestrians strolling through the area were stopped and asked for identification.

The Tiananmen Square incident took place more specifically between April 15 and June 4, 1989. China’s young pro-democracy students took to the square in Beijing to publicly express their dissension, which prompted the Chinese government to take hard action against the protesters. After the student population had occupied the region for seven weeks, the Chinese governed declared martial law in the region, and on June 4, 1989 armed Troops and combat vehicles stormed into the crowd as they tried to block the military’s entrance into the area. Subsequently, scores of unarmed civilian protesters were attacked and murdered in what is reportedly the most horrific act of military brute force against civilians in the history of Beijing. No official death count was ever submitted by the Chinese government.

The protests were sparked by the death of Hu Yaobang, China’s Communist Party’s General Secretary. He was a deposed political and economic reformer. The students originally gathered in Tienanmen square to mourn Yaobang’s passing and called for sweeping changes. They cited freedom of the press, government accountability, and a return to workers control over industry. As days passed, the crowd grew to over a million people in the square.

The initial government response to the pro-democracy demonstrators was indeed rather passive. But as students went on hunger strikes and support for the protests were found to be generating in 400 other cities; China’s leader Den Xiaoping tossed restraint to the wind and opted to use force on the demonstrators. Martial law was enacted on May 20, and 300,000 troops stormed upon Beijing.

Every year on the Tiananmen Square anniversary, dissentious factions spring up and attempt to return to the scene, but meet with an opposition as unyielding as the forces in 1989. China takes a zero tolerance stance against any group that attempts to resurrect the 1989 protest. They forbid even any mere public discussion of the event. Hence, it’s not surprising that again; the Chinese government did indeed issue Tight security on this, the 25th anniversary of the Tiananmen Square Incident.

The Tiananmen Incident did not end after the massacre. In the weeks that followed more arrests took place of demonstrators and any supporters. Foreign journalists were shown the door, and domestic journalists were placed under constrictive government censorship. Officials that showed signs of sympathy towards the protesters were muted via demotion, or purged. Political reforms were halted as well and economic reforms.

The Chinese government was subsequently condemned by the international community. An arms embargo and economic sanctioned ensued from western governments.

The year 2015 is certain to bring a repeat. June 3 and June 4 will roll back around. Protesters will attempt to take another stand, and the Chinese officials will again issue tight security on the anniversary of the Tiananmen Square protests.