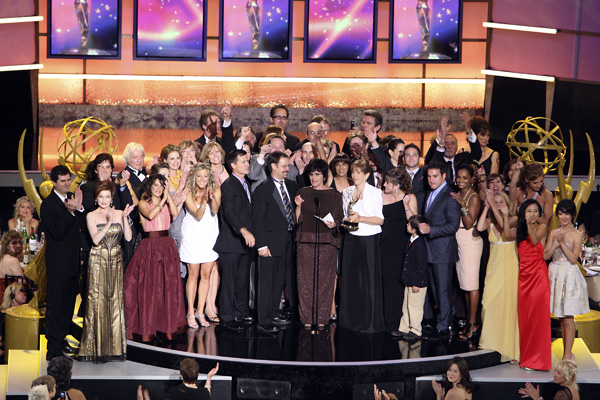 The 2014 Daytime Emmy Awards hosted at the Beverly Hilton Hotel in California, was not televised this year as they did not partner with a cable network. The award show was previously broadcasted on major cable networks for the past 38 years and it used to bring 20 million viewers annually. Unfortunately as interests for soap operas and prime time television shows reduced in the last few years, it shifted to a cable news channel in 2012 and 2013, finally this year the ceremony went online only, and it streamed live the Daytime Emmy Award Winners of the night.

The awards started with the outstanding Kathy Griffin as host of presenting the 41st Daytime Emmy Awards. She started off the night with her jokes and a bit of explicit language that had almost no filters due to the show being broadcast over the internet instead of dealing with cable television networks’ sensitivity. Griffith did not hold back any of her thoughts, including cracking jokes about one of the most popular reality TV celebs, Kim Kardashian.

Viewers of the Daytime Emmy Awards were able to appreciate the show without commercials since it was streamed online only, this allowed for quicker viewing time. The presenting of the Daytime Emmy Award winners, started out with Mr. Bobby Flay who was a no-show, but took the award for Best Culinary Host and for his outstanding culinary show. Other popular TV show hosts who also did not show up to receive their award were Dr. Mehmet Oz and Katie Couric, who were tied winners.

Mario Lopez introduced some of the awards, but unfortunately some of them belonged to those no-shows, one of them being Steve Harvey, whom Mario defended for not showing up by saying Harvey had taken a vacation to Bali because he thought he would not win. Harvey also got the honor to win the Informative Talk Show Award. On the upside for Mario, he took home the award for Outstanding Morning Program in Spanish, as the producer of Un Nuevo Dia. This was the first time in the Day Time Emmy Awards history where this Spanish language category was presented.

For those regular viewers of daytime soaps, there must be no surprise to see The Young and the Restless took sweeping victories in numerous categories, in this only viewing of the Daytime Emmy Awards, with no shock taking the outstanding drama series award. The soap opera had 26 nominations.

Other Daytime Emmy Award Winners which were presented online only were Ellen DeGeneres, who walked away this evening with her eighth trophy for her television show, in the category Outstanding Entertainment Talkshow. ABC’s Good Morning America won the Best Morning Program Emmy. Another first time award introduced tonight was Entertainment News Program which tied between Entertainment Tonight and Extra. The television network that received most awards was CBS, that took home 14 Daytime Emmys. The long time running game show Jeopardy took home the in for Outstanding Game Show. The Lead Drama Awards were taken home by Eileen Davidson, from Days of Our Lives, and Billy Miller, from The Young and the Restless.