Evolution of Geology: The Plastic Rock 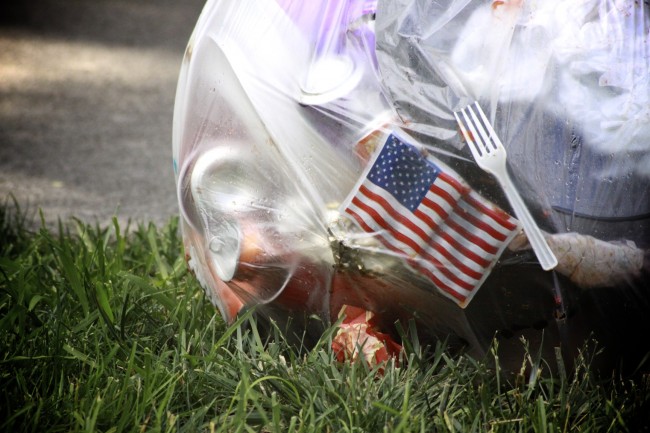 The evolution of geology now includes a milestone, half plastic and half rock, that is layered firmly into this era’s carbon footprint. Canadian geologist Patricia Corcoran, along with the captain of research vessel Alguita, Charles Moore, have discovered a new rock formation on the Big Island of Hawaii. Corcoran and Moore identified mineral and molten plastic stones along multiple sites near Kamilo Beach, one of the most notoriously rubbish-ridden beaches in the world.

Dubbed “plastiglomerate,” these clumps of volcanic rock, sand, seashells, coral, and plastic are appearing all along the coasts of Hawaii’s beaches. Corcoran speculates that these inductions have formed where humans have melted plastic, or where natural heat sources such as lava or forest fires mix with other natural debris, such as rocks, sand or sea shell fragments.

Some of the plastic rock discovered bears recognizable functions, such as forks, or rope. Even toothbrushes have been identified as being embedded in these formations. Plastiglomerates have been located at 21 separate sites, as identified by teams of researchers combing the island’s beaches. Dense plastiglomerates, amalgamated to heavy rocks or coral, are sinking to ocean floors; it is these materials that are washing up on the coast of Hawaii today.

While Moore originally hypothesized that molten lava was at plastiglomerate’s inception and evolution, geologists and researchers agree that lava was not present in the region where these rock specimens were found following the invention of plastic. This has prompted classification of the plastic rocks into two categories: in situ plastiglomerate, which is formed when plastic melts to rock and becomes incorporated into the outcrop, is a more rare find; clastic plastiglomerates, which are rocky structures composed of a combination of basalt, coral, wood and sand debris, as well as coral, is created from the melting of plastics caused by man.

Amateur fossil hunting is a hobby that is accessible the world over. Embedded in cliff faces, along riverbeds, and in jagged crags of rocky shores are small impressions of trilobites and gastropods and petrified imprints, evidence of ancient life that modern civilization can only guess at. The evolution of this new geological element marks the industrial age fittingly, imposing debris into rock in a lasting, indisposable way.

Over six billion metric tons of plastic has been created over the course of the last 60 years. Plastic, it has been known for some time, constitutes almost all of the debris floating atop the ocean’s surfaces. Central to modern life, the average American discards roughly 185 pounds of plastic annually. TakePart magazine reports that there are over 46,000 pieces of plastic per square mile in the ocean. Corcoran postulates that there are many more instances of plastiglomerates the world over, and states that she anticipates many more discoveries of this developing formation along coastlines globally.

Plastiglomerates, along with unmelted plastics, are captured by ocean currents and can be drawn into vortexes known today as ocean gyres. The Great Pacific Garbage Patch, the largest ocean garbage site in the world, is located off the coast of California in the The North Pacific Gyre. Twice the size of Texas, this floating mass of garbage is unrecoverable; this, along with the new discovery of plastiglomerates, may have cemented the likelihood that plastic will be preserved in the geologic records as humanity’s footprint.

The Holocene Epoch (now extant, originating 12,000 years ago), is slated to be replaced by this at-present informal geological era dubbed Anthropocene, which would indelibly mark the influence of human industry and waste on the Earth’s biological, chemical and physical environment. Scientists are calling the discovery of plastiglomerates a global marker towards the Anthropocene Epoch.

The notion that plastics are working into earth’s porous rock structures does not sound all that implausible when experts point out that the national temperature has average temperatures have risen across the United States since 1901. With a heightened rate of warming over the past 30 years. Seven of the top 10 warmest years on record, according to the Environmental Protection Agency, have occurred since 1998.

Due to the fact that plastic can take up to 1000 years to break down, it is seems likely that the evolution of these plastic-and-rock anomalies, along with other pollutants, will be a permanent milestone of this geological period in the history of man. Climate change, global warming, and pollution have been at the focus of news worldwide since a series of documentaries and initiatives were introduced around the year 2000, which is likely when the rock formations scientists are discovering now were created. Much of the data which currently reflects present public opinion was projected well over a decade ago. As more plastiglomerates are discovered at beaches around the world, researchers encourage citizens to dispose of plastics and all waste products responsibly.

2 Responses to "Evolution of Geology: The Plastic Rock"