Five St. Louis Cardinals Who Could Be on the Move: Cardinals Corner 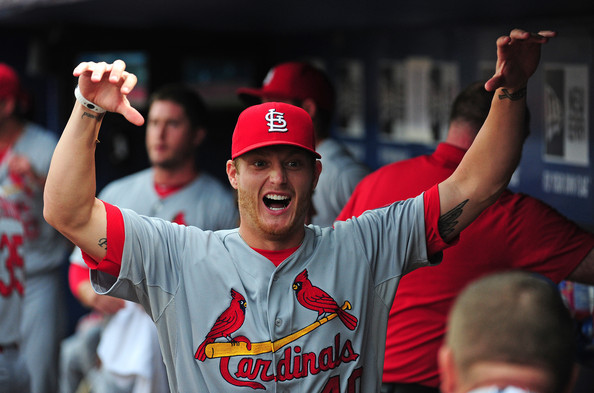 The St. Louis Cardinals will make a move between now and the trading deadline. That seems a foregone conclusion given the way the 2014 season has transpired in St. Louis. The dilemma now facing the Cardinals front office has likely shifted from the possibility of making a move to which players should be moved and why. These are the five St. Louis Cardinal players who will most likely be moved before the trade deadline.

Matt Adams – A quick glance at Adams numbers would indicate he is having a good season and, in some respects, this is true. The young first baseman is hitting .325 and has provided the best defense at the position since Albert Pujols left after the 2011 season. However, Adams OBP is just .337 and he has only 17 RBI on the season despite hitting in the middle of the order all year. That is because “Big City”, as he is called by teammates, is not hitting with runners on base. He has also drawn just five walks on the season and hit just three home runs. The biggest reason Adams could be on the move though are his teammates. St. Louis has too many outfielders on this team and somebody has to go. The likely scenario would involve super-prospect Oscar Taveras taking over in right field and Allen Craig shifting back to first base. Adams is still young and has steadily improved over his brief career, but this may be a numbers game that he cannot survive.

Shelby Miller – Not only are the Cardinals loaded with young outfielders they are also loaded with young pitching. Why else would a team consider trading a former No. 1 pick with a 95-mile per hour fastball that also happened to win 15 games last season. Miller has succeeded in major league baseball already in his young career, but he has also been, by his own admission, unmotivated or resistant to coaching at various points of his career. Consider at the moment his ERA is 4.06, he has already given up 10 home runs and has walked 33 batters this season. Trading Miller could well turn out to be a mistake, but given the Cardinals needs, what they already have on hand, and his current trend, he may have to go.

Trevor Rosenthal – Rosenthal has been dominant the last two season as both the set-up man in the eighth inning and as the closer for manager Mike Matheny. For the past couple season he has consistently hit 98 MPH on the radar gun, but this season something has gone wrong. Rosenthal has lost a little on his fastball despite being just 23-years old and has not adjusted so far to the loss of velocity. Rosenthal is not at the top of the list of five Cardinals that could be on the move, but he would be a coveted commodity.

Carlos Martinez – The availability of Martinez is more about how much the Cardinals are looking to get. If Giancarlo Stanton is really available and Miami is going to trade him instead of eventually paying him, then Martinez comes into play. Martinez is likely the pitcher general manager John Mozeliak would like least to part with, but if a player like Stanton or Tampa Rays pitcher David Price is available, then Mozeliak would have to think about letting Martinez go.

Oscar Taveras – Even the crown jewel of the Cardinals system could be in play. If Stanton or Price are really in play, then other teams will at least ask for Tavares and it would be hard to blame Mozeliak for giving up the budding young hitter for players of that stature. Anything is possible if players of that magnitude are available.

The upside for Mozeliak here is, despite their struggles, they could move any of these five Cardinals and get something of real value in return. Which players stay and which ones go are as much a part of the drama now in St. Louis as the slumping Cards are.