The French Open final has been decided. Serbia’s Novak Djokovic will vie for the title against the King of Clay himself, Spain’s Rafael Nadal. Not terribly surprising considering the title has been won by Nadal eight of the last nine years, and Djokovic is the only man that seems to have his number. Notwithstanding their recent encounters, Djokovic vs Nadal will prove to be a far more interesting encounter since the number one ranking is up for grabs with the title.

In the first semifinals of the French Open, debutant Latvian Ernest Gulbis was outclassed by the much more experienced Djokovic. The best players in the world spend more time on courts than the rest of the field; their fitness, as a result is on another level. Gulbis did not seem to have the energy to compete as well as he did against Roger Federer in the fourth round. He did exceptionally well to down sixth seed Thomas Berdych in the quarterfinals in straight sets, but Novak Djokovic continues to prove he is a cut above the competition with a 6-3, 6-3, 3-6, 6-3 victory over Gulbis.

Rafael Nadal has had an interesting year so far, below par by his standards, but certainly one worth talking about. His lack of dominance on the surface that birthed the moniker “King of Clay” for the Spaniard seems to still give him the magic when he needs it. In the second semifinal at the French Open, Nadal produced an exhibit of tennis mastery as he demolished England’s Andy Murray 6-3, 6-2, 6-1 in an hour and forty minutes.

The normally very competitive Murray had no answers to Nadal’s aggressive and consistent groundstrokes. Nadal did not have much heat on his serves, with talk of a back injury being the possible culprit for the lack of pace, however it had no effect on the outcome. The French Open crowd was all but silent at the end of the second set, and with the inevitability of a quick finish looming around Murray as his body language and energy seemed to slouch, Nadal went to work.

In the end the one-sided match became difficult to watch, and the Wimbledon Champion seemed drained by the encounter. A very good effort and run to the semifinals of the French Open for the Scotsman, and onto his home turf for the next big challenge. For now it is Djokovic vs Nadal for the French Open Final and the number one ranking in the world.

Despite Nadal holding the edge in their head to head encounters (22-19), Djokovic’s recent string of victories over the Spaniard illustrate how a few points and changes can alter an outcome. Many of Nadal’s victories in the past over his Serbian rival have been very close affairs, such as the 2009 ATP Master Series 1000 Madrid semifinal which lasted over four hours. Nadal scraped through with a 3-6. 7-6(5), 7-6(9) victory, but the outcome was never certain. 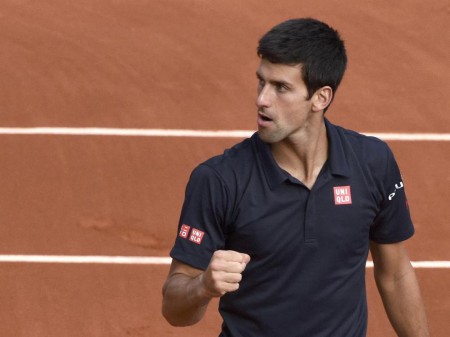 Last year’s semifinal of the French Open was a torrid, thrilling battle between the two. Nadal managed to prevail 6-4, 3-6, 6-1, 6-7(3), 9-7, even after being defeated by Djokovic weeks earlier in the ATP Master Series 1000 Monte Carlo final. Roland Garros is a magical place for Nadal, who has lost just one match in the past decade. Djokovic has his work cut out for him to win his first French Open title, and complete his career grand slam.

Djokovic looks strong and self-assured, but Nadal manages to produce his best tennis at this very tournament. His recent ascension back to stellar form and confidence might be all the edge Nadal needs to defeat his longtime foe, and defend his beloved title. Sunday’s final will decide who will reign at the top of men’s tennis and carry the French Open title in a dream final match-up of Novak Djokovic vs Rafael Nadal.