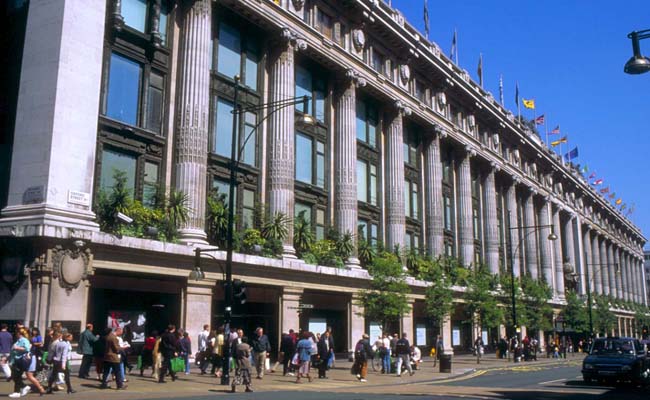 Lindsay Lohan was the best customer at Selfridge’s department store in London yesterday. “Shocking” reports came out that the Mean Girls actress, known for her wild public persona, was seen running naked through Selfridge’s London store on Oxford Street. Panting British tabloids quickly jumped on the story of the slim, red-haired celebrity emerging naked from a dressing room and “laughing hysterically” as she was chased by store clerks, but the fleeting gossip was quickly laid to rest when a Selfridge’s publicist reported later at GossipCop.com that nothing of the sort happened. The story had already hit the tabloid press. Barely anyone cared about the retraction. The store’s famous publicity machine was at it again.

Sensational publicity has always been the name of the game at Selfridge’s department store. Established in 1909 in London by the flamboyant Harry Gordon Selfridge, a Chicagoan with a vaudeville sense of publicity, the store quickly became famous in Edwardian England for its elaborate displays, seductive promotions and carnivalesque entertainment. In a time before movies, radio, television or the Internet, Selfridge’s became the entertainment hotspot of the city. It was difficult many times to contain all the crowds that would line up to view the displays. Selfridge himself dubbed his department store “the third biggest tourist attraction” in London, after Westminster Abbey and the Tower of London.

The Lindsay Lohan gossip that flew out of the store and into tabloid headlines yesterday is the latest in a series of promotions that have contributed to the department store’s growth in recent years. A new interest in the history of Selfridge’s has spawned books, articles and a BBC miniseries starring Jeremy Piven and Aisling Loftus called Mr. Selfridge which aired last year on PBS. Recently, the department store owned by Canadian billionaire Galen Weston announced plans for a £300 million upgrade to its London flagship store on Oxford Street. The redevelopment, which will create new grand entrance halls and retail space, will be considered the largest single-project investment for a department store in the world.

Lindsay Lohan, while being Selfridge’s best customer yesterday by contributing her public persona to their bottom line, was in London preparing for a possible role in the West End revival of David Mamet’s Speed-the-Plow, which is set to open later in the year. The actress’ struggles to re-enter the hot lights of Hollywood stardom have made headlines in recent years. She hopes to restart her career in London’s West End.

David Mamet’s play has a long history of celebrity stars in the lead role. Originally debuting on Broadway in 1988 with Madonna, the play centers on a young and naive struggling actress who is caught up in the manipulations of a Hollywood producer. In 2006, the role was played by Alicia Silverstone whose struggles as a child actress endeared her to the role. In 2009, the Broadway role was played by Elisabeth Moss who plays Peggy Olson on Mad Men. Although being Selfridge’s best customer yesterday, Lindsay Lohan hopes a West End debut will spark more than tabloid headlines for her career.