Maksim Chmerkovskiy Is Definitely Leaving ‘Dancing with the Stars’ 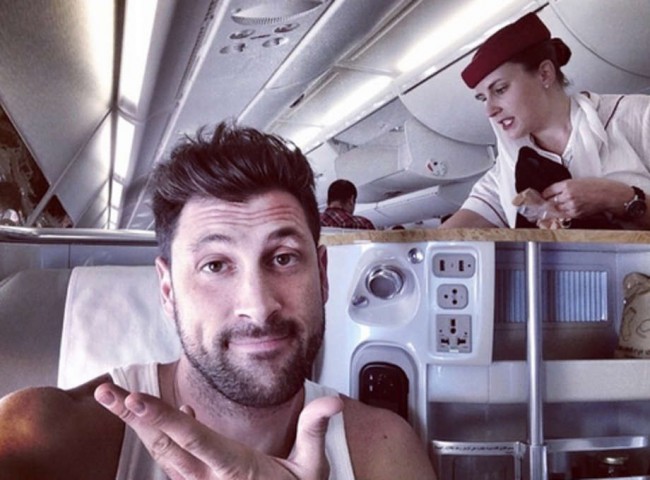 Looks like the rumors are true regarding Maksim Chmerkovskiy and his inclusion on ABC’s Dancing with the Stars. The ballroom heartthrob and most recent winner of the reality competition has decided to leave the show. However, there is a twist: he’s leaving one version of the show for another. The 34-year-old is actually headed to the version of the show that airs in India, signing on as a guest judge for four episodes of Jhalak Dikhhla Jaa, beginning Monday, June 6. He posted an image to his Instagram of him flying to the south Asian country.

Chmerkovskiy originally departed Dancing with the Stars in early 2013 and officially returned earlier this year. He had been a part of the competition since the second season of the show, which aired in 2006. He returned twice: once for a challenge given by judge Len Goodman in season 16; the other, as a guest judge for season 17, both in the same year. With his full return for season 18, he won his first mirror ball trophy thanks to his partner, Olympic ice skater Meryl Davis. Following his victory, he hinted that there was a possibility that he would not return for the next season beginning later in 2014.

The guest judge stint seems to be following his wish to become a more permanent fixture at the judges’ panel for the show. During an appearance on The Wendy Williams Show back in May, Chmerkovskiy mentioned that it was definitely something he was interested in.

“I’m a good judge,” he said to the talk show host. “I judge the way it’s supposed to be. I know this business, I’ve been in it and I grew up in it.”

Chmerkovskiy has been quite vocal over past critiques he has received during his time in the competition. His sometimes aggressive demeanor toward the opinions of judges Goodman, Carrie Ann Inaba, and Bruno Tonioli, have relented a bit and viewers witnessed a humbler side of Chmerkovskiy for season 18. However, other guest judges have not been privy to seeing that softer side. When Abby Lee Miller, the star of Lifetime’s Dance Moms appeared on the show in 2014, he admitted that her opinions on his dancing skills did not matter to him.

“I know what I’m talking about,” he said to Williams, “unlike some of the guest judges that we had this season.”

This is not the first time he has stepped outside of one reality competition to temporarily join another. In 2009, he participated on a second ABC show, The Superstars. For the show, celebrities were paired off with sports figures to train for and eventually take part in a decathlon-like event. Chmerkovskiy and his partner, freestyle skier Kristi Leskinen, ended up taking home the gold. In 2011, he appeared on the Ukrainian franchise of The Bachelor. He did find a connection with a woman named Sasha, but ultimately, the relationship failed.

Many of his fans may be worrying about a more permanent departure; however, there has been no definitive word on his plans. The 19th season of the American franchise of Dancing with the Stars will air in the fall. It is still too early for official cast announcements, which would include Chmerkovskiy and the participation of any other professional dancers.