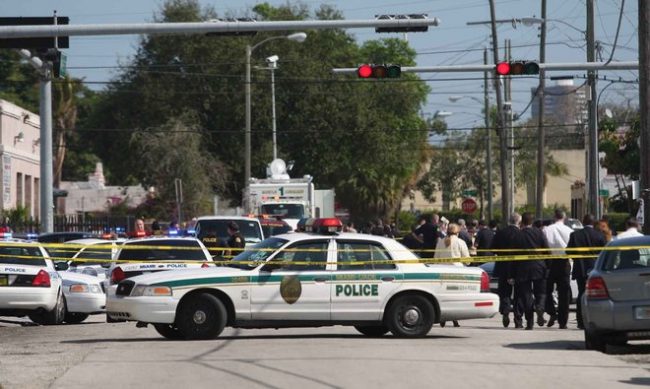 In a deadly mass shooting, at least nine people were hit by a hail of bullets that left at least two dead in the early hours of Tuesday morning in Miami. The dead have been identified as 30-year-old Kevin Richardson and an unnamed teenage girl. According to local reports, the residents of an apartment building in the Liberty City section of Miami-Dade county awoke to the sounds of a gunfight, which left one victim dead on the spot, while the other died at a nearby hospital.

The incident happened at about 2 a.m. at the northwest corner of 12th Ave. and 65 St. in the Liberty City neighborhood, which is approximately six miles north of downtown Miami. According to The Miami Herald, police reported that two men were seen emerging from a dark SUV. They stood on the street across from the housing complex with assault weapons, allegedly a rifle and a machine gun, and then started shooting at the people milling around the building. The horse shoe-shaped two-storey apartment structure was pockmarked by the impact of the bullets.

Dozens of green police markers were seen on the ground to indicate spent bullet casings. Local witnesses counted more than 60 such markers along the street and the staircase of the apartment building. Broken glass littered the area.

According to Frederica Burden, a Miami police spokesperson, ambulances rushed seven people to the Ryder Trauma Center at Jackson Memorial Hospital in Miami, while a few others went there on their own. It has been reported that one of the shooting victims is a young teenager, who is reported to be in critical condition at the hospital. Besides her, several other victims had to undergo surgery for bullet wounds.

A hospital spokeswoman said she was not authorized to release any information, including the number of people who had been brought to the trauma center. She also said the patients had requested anonymity and did not want to release information about their medical conditions.

Miami police is trying to determine the cause of the shooting, which was reported to them at about 2:15 a.m. While releasing no details, authorities claim that the attack was planned and was targeted towards a specific person or persons. Asked if they had any suspects, Burden said that it was too early in the investigation and the police were trying to piece the evidence together. The local police are requesting residents or eyewitnesses to come forward with any information or leads about the shooting.

This is not the first time that Liberty City has faced such brutal gun violence. A historically low-income neighborhood, it has witnessed regular violence over the years. While most people standing around the cordoned area refused to comment on the shooting saying that they were afraid of consequences, one resident Jose Fernandez said that gun violence was a daily occurrence in the area. “I have friends who have been killed,” Hernandez said. “This violence has to change.”

Earlier this month, in a third march of its kind, religious leaders and some 40 Liberty City residents walked together in a pre-Father’s Day procession to honor the memories of victims of gun violence. The marchers, many of whom had lost friends and family to bullets, wanted to keep their memories of the victims alive even though they were no longer the focus of the media. With most of the cases remaining unsolved because eyewitnesses fear retribution, the marchers were asking residents to come together, unite as a community and stand against violence.

Miami’s City Manager, Daniel Alfonso, who was present at the crime scene told reporters that the city authorities would be reexamining their strategic approaches to curb crimes in the neighborhood, specifically gun violence by working more cohesively with local police officials. A police spokesperson said that in a recent move, six additional officers and a canine unit had been added to the neighborhood. The area around the shooting incident was shut down Tuesday morning as investigators combed the crime scene for evidence.