Melanie Griffith and Antonio Banderas Not Uncoupling but Divorcing 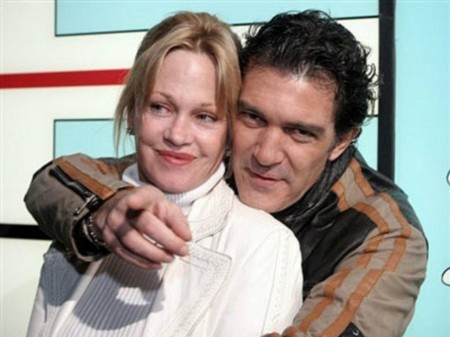 18 years of marriage have come unravelled for Melanie Griffith and Antonio Banderas and this celebrity couple is not “uncoupling” but divorcing, albeit in a “thoughtful and consensual” manner. Outsiders looking in will find no new age and hippified terms to this dissolved relationship, nothing except for two grown ups, spelt mid 50’s adults, who are calling it quits after a long time together.

56 year-old Melanie Griffith, daughter of Hitchcock heroine Tippi Hedren, has been down the marital path of discord before with three divorces under her belt. One with actor/producer Steven Bauer and two with daughter Dakota’s father Miami Vice star Don Johnson.

Melanie was an original “wild child” whom mother Tippi allowed to move into the much older Don Johnson’s house while she was still very young. The actress made her acting debut in the 1975 Arthur Penn film Night Moves where she worked with Gene Hackman, Jennifer Warren and Susan Clark. As mentioned in IMDb, she played a very promiscuous teen and she appeared nude in the film. This became her signature in terms of film parts.

53 year-old Banderas started in the world of film playing roles in sexually provocative movies that kept him in the world’s eye for around a decade before co-starring in the 1992 film The Mambo Kings with Armand Assante and catching the eye of Hollywood. At the time of the film’s debut, Banderas could not speak English and had to learn his lines phonetically.

As Antonio’s star continued to rise, he made his directorial debut with the 1999 film Crazy in Alabama which starred Griffith. According to Melanie this was when the two of them fell in love at “first sight.” Now after over 18 years of marriage later, Banderas and Griffith are not consciously “uncoupling” but divorcing.

Rather interestingly, Gwyneth Paltrow, who brought the new age term of uncoupling to the world’s consciousness via her Goop website, comes from a younger generation than Griffith or Banderas. That combined with the fact that this 41 year-old star is a Southern California gal born and raised, may have much to do with the hippy-sounding “I’m okay, you’re okay” psycho babble term for modern divorce.

According to sources close to the couple, the marriage has been on the skids for quite some time and it was only after their 17 year-old daughter Stella got near her 18th birthday that they decided to announce and formalize the split.

Celebrity website TMZ have reported that it was Griffith who actually filed for the divorce. Irreconcilable differences are said to be the reason given for the split and Melanie asked for spousal support and joint custody of Stella. The request for support makes sense when comparing her career to Banderas’ continually rising star. In terms of income, his would logically surpass hers and as the break is amicable, Antonio will most likely not mind the request.

Melanie Griffith and Antonio Banderas who have announced their divorce and are not uncoupling, are the latest celebrity couple to “break-up.” Days before their joint statement was released, it was reported that Jennifer Lopez dumped her toy-boy lover Casper Smart. While it is disturbing to see any couple’s marriage die after such a long time, at least the two stars are surviving the death by being amicable with one another.