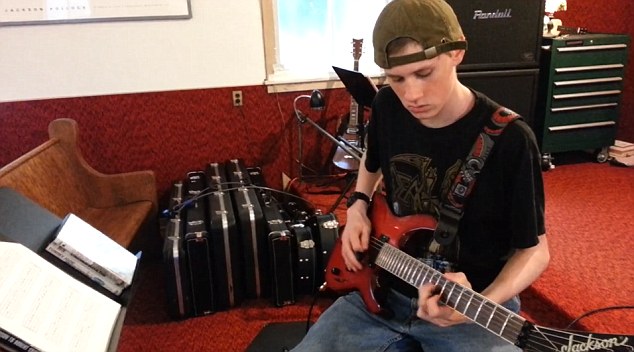 A Minnesota teenager apparently planned to murder his entire family and also blow up his school but he was blocked in his attempt to perform the planned massacre, according to taped recordings that were released to the public on Tuesday by police. John David LaDue, age 17, stated to Minnesota police in a recorded interview that he did not plan on living past the day he planned on carrying out the mass killings.

LaDue was arrested in May and had been charged with six counts of having explosive devices, four counts of attempted first degree murder, and two counts of first degree criminal damage to property. Each of the charges allegedly included a plan to kill his parents, a sister, and then a school relationship officer and as many students as he possibly was able to along with himself. He added that he wanted to be gunned down by members of SWAT to show he was not a wimp.

In the auditory recording, LaDue spoke calmly as he detailed his plot to set off numerous bombs through various hallways inside his high school in Waseca, Minnesota where he attended high school as a junior. He explained that he was then going to enter the school and begin throwing both pipe bombs and Molotov cocktails so to destroy everyone he came in contact with and then when SWAT showed up, he was going to let them destroy him.

The case against the teenager has been laid out in hundreds of document pages that were also released on Tuesday. In addition there were video tapes that showed alarming behavior of LaDue testing some of the bombs he made from materials that were later found in a storage locker. This was the same locker he was walking to when a witness saw him acting suspiciously and proceeded to dial 911.

After he was arrested, police investigators explained that LaDue revealed to them that he had written his plans down in a notebook and was kept in a locked guitar case in his bedroom. LaDue also stated that he owned several handguns, an assault rifle and 400 rounds of ammunition inside a gun safe that was also located inside his room. There were search warrants issued, and the police were able to recover seven different firearms, ammunition rounds and three working bombs from the teenager’s house, along with a ski mask and also black clothing items. A bomb squad was sent to the storage unit and discovered three more completed explosive devices along with materials to produce several more. Members of the bomb squad explained to prosecutors that they were taken aback by the sheer volume of bomb making materials and apparatuses that LaDue had.

LaDue dismissed the theories that said bullying was what led him to plan the carnage. He declared to police that he was not bullied, and did not believe he had never been in his life. He stated that he had good parents and had lived in a good town. He added that he thought he was just very mentally ill and that no one had noticed it. Yet he wanted to kill his good parents. He said that they had done nothing wrong; he just wanted to have as many dead victims as possible. LaDue added he also wanted to shoot as many students as possible with guns he had stolen from his father.

LaDue’s voice hesitated several times through the interview, including when he described why he wanted to die himself. He said that he just wanted to get out of “this place.” The detective interviewing him responded to him by asking why LaDue felt “this place” was so bad? LaDue stated that he did not know but that he did not care for it. It was unclear what “this place” meant but was assumed to be LaDue’s life in general. Now a psychological exam has been scheduled.The teenager apparently planned to murder his entire family and also blow up his school but he was blocked in his attempt to perform the planned massacre.