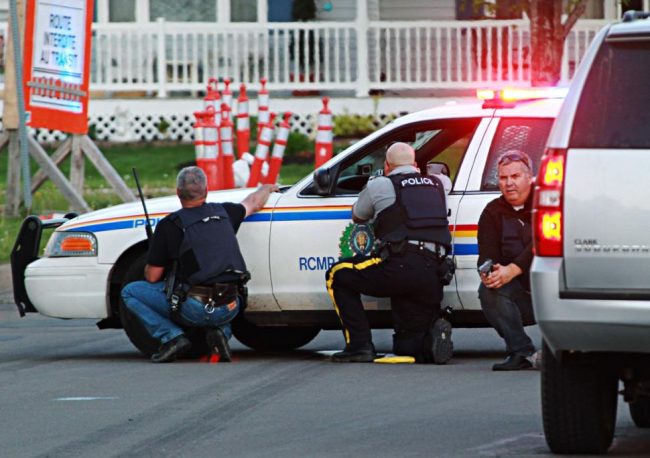 The Royal Canadian Mounted Police are on the hunt for 24-year-old Justin Bourque, a white male believed to be a cop killer.  He is wanted for killing three cops and injuring two more officers during a shootout on Wednesday in the Moncton area of New Brunswick, Canada. Bourque is said to be dangerous, and is armed with a knife, crossbow and high powered rifles. RCMP officials are asking residents of the area of Hildegard Road and Ryan Street, in the city’s north end, to stay in their houses until further notice.

Residents in the region say they thought they had heard gunshots earlier in the evening, and one resident thought that it was their child dropping something on the floor while playing on the second floor of the home. It was a bit later while watching the news that they realized that it really had been gunshots that they had heard. To further protect the citizens they feel are at risk from the cop killer, the Royal Canadian Mounted Police of Moncton, New Brunswick are also asking them to stay inside and lock their doors and windows to protect themselves. They are also advising drivers to stay out of the area while they hunt for the suspect.

The Moncton, New Brunswick, Royal Canadian Mounted Police have also set up a number of road blocks in their hunt to catch the cop killer, although they are concentrating in the area of the Pinehurst subdivision. There have been a few Tweets featuring a man in army fatigues that the RCMP are saying is the suspect, Justin Bourque, while most of Twitter is being overwhelmed with posts from those living in Moncton. The whole of the town is Tweeting their condolences to the families of the affected, while many more are demanding action and answers to how this could happen and pleading with police to get the person responsible to face justice.

At the Moncton Hospital, where the casualties of the shooting were taken, a code orange was declared, indicating they were dealing with a large number of the wounded. The Moncton, Hospital has restricted visitors to those who are family members of critically ill patients, and has also asked other citizens to refrain from visiting until further notice. The incident brings back memories for Moncton residents of the 1974 murder of two Moncton, New Brunswick, Royal Canadian Mounted Police officers. Constable Michael O’Leary and Corporal Aurele Boureois were taken down by cop killers who were eventually captured, and slated for execution, before the death penalty was forsaken in Canada in 1976.

The Premiere of New Brunswick has lamented that the episode was a sad and shocking event, and extended his prayers and thoughts to those who have suffered from the tragedy. He also urged people to obey the authorities. With canine units, helicopters and snipers all over the area in the hunt for the cop killer, the Moncton, New Brunswick Royal Canadian Mounted Police felt it would be in the public’s best interest to stay inside their homes during this emergency, and they advise those who do not live in the area to please stay away. The 70,000 residents that make up Moncton, on the eastern side of New Brunswick, are showing a massive amount of support for everyone involved in the shooting on social media outlets. As a result, the RCMP is asking residents not to share police locations on social media sites, and to call 911 with any information they may have. This is perhaps a true testament to how serious the situation really is, considering the power of social media.