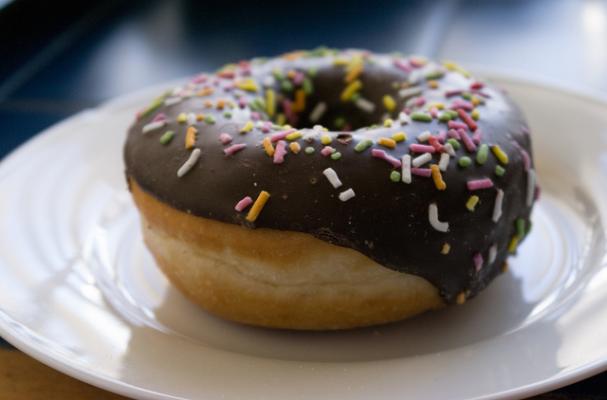 Biting into a fresh doughnut can be a real treat, and since today is the first Friday of June many places are giving away free doughnuts. From the cronut, invented and trademarked by a bakery in New York City, to many specialty stores around the country, there is bound to be something for everyone – even a Pepto-Bismol doughnut exists.

The Salvation Army is responsible for this food day. Starting on June 7, 1938, the organization gave away free doughnuts to soldiers in World War I. These treats were also given out during the Great Depression. World War II saw the same practice of giving soldiers on the frontlines the treat, as the American Red Cross had young ladies distributing fresh doughnuts accompanied by popular tunes of the times.

This year’s National Doughnut Day follows the news of Krispy Kreme Doughnuts’ shares being labeled as oversold on Wednesday, with some shares as low as $15.87 each. The company’s fiscal first quarter earnings proved disappointing, with blame placed on this past winter’s harsh weather. The company has over 850 stores worldwide. It has opened five stores so far this year.

Creators of the doughnut are believed to have come from Hertfordshire, a county in southeast England, and date back to around 1750. They used to be the size of walnuts, hence the “nut” in the name. They did not have holes until it was discovered that doughnuts cooked much more evenly with a hole in the middle. The holes are eaten as well, with Dunkin’ Donuts calling them “Munchkins.” The urban legend that police love the treat with coffee started when those on patrol late at night and in the early hours of the morning only had access to shops that sold these two items.

Many places nationwide are offering free doughnuts to customers on Friday, with long lines expected. Krispy Kreme is giving away a free doughnut to every customer. Other places with free offerings include Dunkin’ Donuts with a purchase of any drink, but it will be worth checking to see which stores are participating in the giveaway first.

Tim Hortons is also offering a free treat with any purchase. The company is recently under fire from some environmentalists over their use of palm oil, since planting palm trees for oil is destroying rain forests. Cumberland Farms is also joining in, with a free doughnut offered with a purchase of coffee or one of their new cold drinks. Doughnut Plant NYC is offering a mini cake doughnut showered with “carnival sprinkles” with every purchase, while stocks last, of course. Winn Dixie is offering one doughnut per customer, and is found in southern states Mississippi, Georgia, Louisiana, Florida, and Alabama.

The cronut, a “croissant-doughnut hybrid,” was invented by Chef Dominique Ansel and was launched May 10, 2013. It proved to be extremely popular and many customers did not mind waiting in long lines for the treat. It took two months and Ansel went through over 10 recipes to perfect the unique treat. A new flavor is offered every month, with June offering strawberry balsamic and mascarpone with basil sugar, and each costs $5.00. It would not be surprising to hear of even longer lines come this Friday at the Dominique Ansel Bakery.

With fans including Homer Simpson, this National Doughnut Day looks to be another success as thousands may decide to wait patiently in line for a free treat. Upcoming food days include National Lobster Day (June 15) and Eat Your Vegetables Day (June 17).