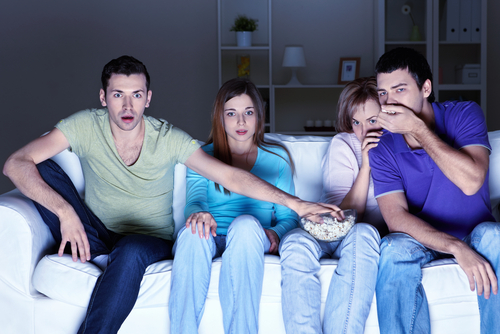 Since the advent of the popular streaming service Netflix, people’s addiction to it has been referred to as “binge watching.” The average user is watching only about nine hours a month of Netflix, but it is not the people coming home from work to relax for a bit that are causing concern. The Netflix addicts that are being referred to are not the people who sit and watch a movie, or one or two episodes of Breaking Bad, but those sitting down to what amounts to finishing entire series in a weekend. While on the surface this may seem a little extreme, it may be more common than you might think, and it is increasing.

A comedian, Mark Malkoff, sat down to start an experiment. For one month he wanted to see if he could get the full value for the money he was paying for Netflix, which he did not think that he was getting at the time. Sitting down for between 8-10 hours a day, Mark started watching movies. Then more and more movies, until by the end of the month he had consumed a ridiculous 252 of them. All in all Mark Malkoff estimated that he watched an absurd 404.25 hours worth of Netflix programming. His purpose may have been comical, but he did prove a very important point, though maybe not the one he was hoping for. Just because someone has a reason for something they are doing, does not mean that it is a legitimate reason to waste nearly 17 days of their life watching a screen.

Another more realistic example of the increase in Netflix addiction however, occurred during release of the second season of Netflix’s hit series House of Cards. Many people watched at least one episode of the popular show, but some went a little further than that. Over one million viewers did not simply enjoy an episode, or two, or three, but five episodes in a weekend. This may not seem like a lot at first glance, however House of Cards is a 60 minute program so doing some simple math shows that all one million viewers combine spent a total of five million hours watching Netflix that weekend. Many people around the U.S were snowed in at the time, as some may contend, and so may not have been able to do anything else for five hours.

The problem is not just sitting down to enjoy some entertainment, and it never will be. The real problem is when  an increasing number of people starting abusing services like Netflix, Hulu, or even cable TV, and watching for hours on end, instead of reading a book, teaching kids how to make snowmen, or shoveling snow. Living in a country like the U.S most do not have the same types of problems that many other nations do. However, the obesity epidemic is still a major issue for many Americans, and “binge watching” is not helping anyone. Taking just the first word of that term, “binge,” and attaching it to other words might help to put the addiction in perspective; creating terms such as “binge drinking,” or even BED (Binge Eating Disorder). Head turning terms like these never fail to attract the attention they should, and the addiction known as “binge watching” should provoke just as much concern. As time goes on and Netflix continues to increase the variety of content they offer, hopefully self-control will win out and “binge watchers” will find better things to do, or at least get the help that they need. It is important to point out however, that Netflix and companies like it are not to be blamed for the way their services are being used. That responsibility falls on the shoulders viewers.

2 Responses to "Netflix: The Addiction Increases"